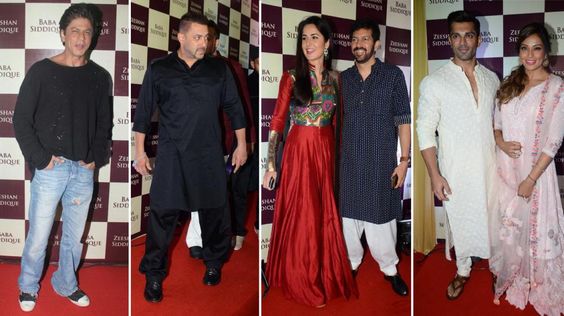 Heard the latest? Shah Rukh Khan, who had hugged Salman Khan last year at Baba Siddique’s Iftaar bash in full public view, not only avoided the same spectacle for the media but also ensured that he reached the venue only after Salman Khan and his family had already left.  In fact, Salman Khan was there with his whole family and was seen happily mingling with the crowd, but Shah Rukh Khan was nowhere to be seen at the spot.

It was because of tiff over release date of Raees and Sultan? In fact, there is a strong buzz doing the rounds in the industry that Shah Rukh Khan was not pleased by the way Salman Khan’s Sultan usurped the release date of Eid from his big budget project Raees, in spite of the fact that the latter had announced its date months in advance. Salman Khan’s Sultan just came in and they declared that they would be releasing on Eid, without any consideration for Shah Rukh Khan or his film Raees.

This, obviously irked King Khan and he did not want to put a hollow show of solidarity when there was none in fact. Of course, the official explanation given out was that Shah Rukh Khan was too busy shooting for an advertisement, and so could not make it in time to meet Salman Khan at Baba Siddique’s Iftaar bash. However, insiders point out that Iftaar bash was a well-publicized even and King Khan knew everything in advance. Had he wanted to meet Salman Khan, it was not easy for him to make provision for coming a few minutes early to keep the tradition of hugging alive for the records, at least.