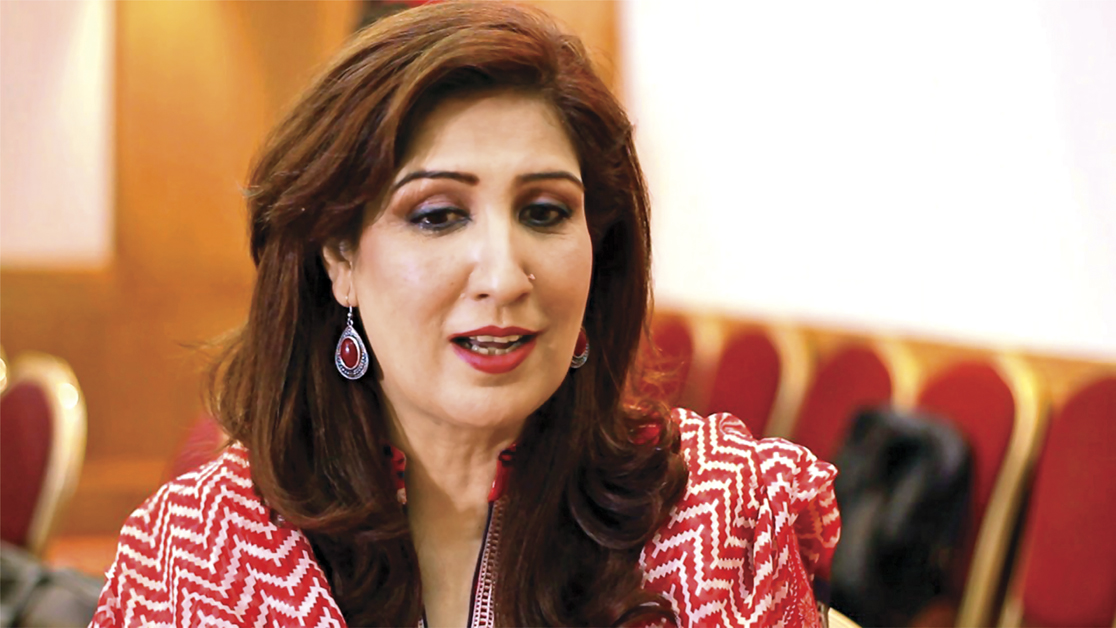 Syeda Shehla Raza, who is the third woman deputy speaker of the Sindh Assembly is the first and only lawmaker of the provincial legislature to clinch the coveted post for two consecutive terms. Her achievement is more remarkable because unlike the majority of women politicians in this country she has no strong political family background. She entered politics as a student of Karachi University back in 1986 because she could not stand the military rule and believes in fighting for change.

Shehla Raza comes from a respected and well educated middle class family. She was raised among her four siblings with high moral and cultural values. She is the fourth child of Syed Mohsin Raza Zaidi who was an employee of the Pakistan Atomic Energy Commission. She was born in Karachi. She got her Masters degree in Physiology from the University of Karachi. She joined the Peoples’ Student Federation in 1986 at a time when all political activities were banned and became its joint secretary and girls’ wing vice president. She was elected as member of Provincial Assembly of Sindh in the Elections held in year 2008 on the reserved seat from the platform of Pakistan Peoples Party Parliamentarian. In 2008 she was elected un-opposed as Deputy Speaker, Provincial Assembly of Sindh. By virtue of this, she also became the Vice President, Commonwealth Parliamentary Association, Sindh Branch. She was re-elected as deputy speaker in 2014.

Shehla’s journey to the position of Deputy Speaker is full of hardships and sacrifices. She was arrested many a times for her bold stances against the military dictatorship. By a rough estimate she has spent a total of four months and fifteen days in several jails. She has had her share of political victimization. She was picked up and subjected to severe torture by the police’s infamous Crime Investigation Agency (CIA) in 1990 on charges of arms trafficking. She was charged with driving a taxicab full of illegal arms and opening gunfire on police with an AK-47 assault rifle when she was intercepted by the police. The police’s amusing charge of accusing a woman of driving a cab and at the same time exchanging fire using a Kalashnikov with the law-enforcers subsequently earned her bail from the court. However, by that time she had already spent four months in the Central Prison Karachi and 28 torturous days in the CIA Centre. She had been arrested before being released on bail after 50 days in the murder case of two Karachi University employees. She was exonerated of all charges in 1994.

Shehla Raza married Ghulam Qadir, a pharmacist, in 1991 and the couple had a daughter in 1992 and a son in 1994. After 1997, her husband Ghulam Qadir was transferred to Islamabad and she continued her political work in Wah Cantt and Rawalpindi. She was back in Karachi in 2000 and by 2005 became the general secretary of the PPP ladies wing Karachi division.

In 2005 Shehla suffered a tragedy that shocked Karachi. She lost both of her children, 13-year-old Aks-e-Batool and 11-year-old Shayan Ahmed, in a horrific car accident. One minute her domestic life was perfect with a loving husband and two brilliant kids and the second it was all taken away from her. Many would just crumble after experiencing such a loss but Shehla focused all her energies and her mind on her work. Her husband, who is seen with her most of the time, proved to be a big support. She marches on to work for her people and her ideals.

Shehla makes frequent appearances on television boldly talking about matters that are close to her heart. Calm, composed with a pleasant smile, this tall and elegant lady is a treat to listen to and watch.

Speaking to Brides & You exclusively about her life and her dreams she touched upon many subjects. Women empowerment is one subject that is close to her heart. Whenever she finds opportunity she encourages young girls to become independent and take charge of their lives. She acknowledges that it is not easy for our girls because of a million taboos and harmful traditions but she maintains that it is doable and all those who have dared to break free where able to improve their lives and the lives of the people associated with them. The key is in hard work, persistence and patience.

We chose Shehla to be our role model for this issue because she qualifies every bit to be one. She is often featured in the press speaking out for the rights of the down trodden. She joined Peoples Party because she believes it works for the rights of women and is the only party that talks about Pakistan as a whole and does not think in terms of separate provinces.

Women are suppressed in terms of socio-economic and tribal formations. She believes that it is mostly women who suffer and are often mistreated given the fact they live in a patriarchal society. She made headlines when she criticised the order by Sindh High Court, which allowed what she described as an ‘underage girl’ to be married. There is a law that prohibits marriages of girls aged less than 18 years. The outraged Shehla Raza reminded the custodians of law that Sindh Assembly had enacted a law to prohibit marriage of girls aged less than 18 years. This was strongly opposed by the Council of Islamic Ideology which issued an ‘edict’ for dissolving it but her government showed its commitment to resolving women issues by standing their ground.

She is constantly speaking against the sensitive issue of forced conversion of minority girls to Islam. She has pledged to adopt a legal course to provide protection to minorities and young girls and also have legislation made against forced conversions.

Shehla Raza who was a brilliant student recalled that her childhood dream was to become a doctor but her mother was uncomfortable sending her to Nawab Shah for medical education. Looking back at it she realizes that it was a good turn of events for her as she feels she can do a better job of serving humanity in her present position. Recalling the pleasant memories of her childhood she said, she was a very naughty child and would often end up being scolded by her mother. She could not resist mimicking if someone used a pretentious accent in her presence. Sometimes she would start the mockery right in front of the person which her mother found very offensive. She remembers playing with dolls and stitching their clothes and spending endless hours doing just that.

Due to her bold positions on sensitive subjects she is often facing threats and that is why her husband becomes uncomfortable if she goes shopping. Now the only time she goes shopping alone is when she is angry with her husband. Her tastes are simple but she likes to pick for herself and has to design her own clothes. She likes reading poetry and loves Chinese and Pakistani food. Her all-time favourites are Aaloo Ghost and Daal Chawal. She likes nature and her idea of relaxation is a walk on the beach and in the mountains. She keeps busy round the clock because she said if she is not busy doing something she starts to cry, with having a heart as burdened as hers is. We wish her success for all her future endeavours for the betterment of our country.