7 Fascinating Wedding Traditions From Around The World 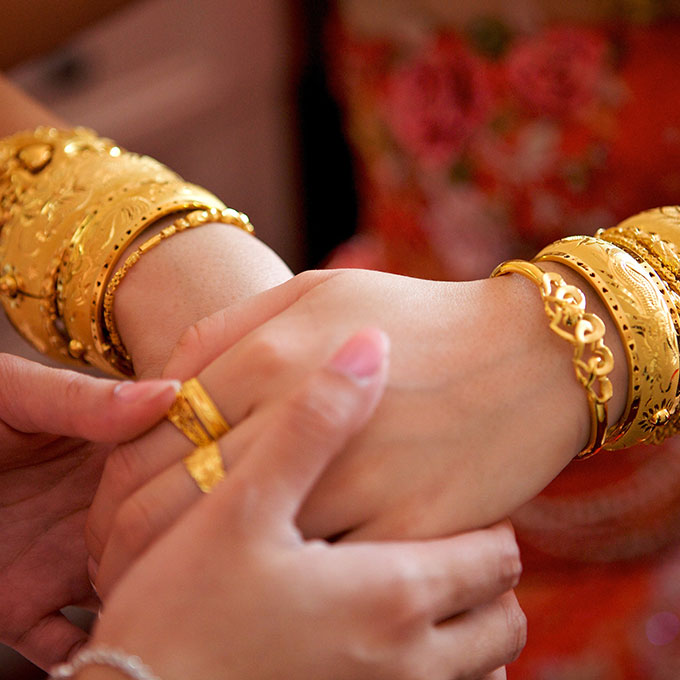 We’ve rounded up 7 of the most awe-inspiring rituals from lands far, far away to give you an idea of what’s happening beyond your backyard. If you’re particularly charmed by a certain custom, feel free to adopt it for your own.

Congo: Are You Serious?
While most about-to-be marrieds brim with excitement and anticipation, Congolese brides and grooms must keep their happiness in check — during their entire wedding day, from ceremony to reception, the two are not allowed to smile. If they do, it would mean they weren’t serious about marriage.

Bad news: They must consume these treats from a toilet bowl. The point is to give the twosome strength before their wedding night; unfortunately, it might give them something else.

China: Bullseye!
Let’s hope the groom remembers to remove the arrowheads. In China, a prospective husband will shoot his bride with a bow and arrow several times then collects the arrows and breaks them during the ceremony, to ensure their love lasts forever. What would Cupid do?

Mauritius: Go Large or Go Home
Many brides-to-be in other countries go on strict diets to lose weight before the wedding. Not so in Mauritius, where young girls are forced to pack on the pounds before their weddings. The chubbier she is, the better for the husband who is thought to be wealthy with such a well-fed wife.

Greece: A Close Shave
Taking the term “groomsman” literally, on his wedding day, the groom’s BFF becomes his barber when he pulls out a razor and shaves his face. But the groom’s day also has a sweet side: His new mother-in-law will feed him honey and almonds.

Japan: An All-White Dress Code
On her wedding day, the Japanese bride having a traditional Shinto ceremony wears white from head to toe, including makeup, kimono and hood. White denotes her maiden status; the hood hides her “horns of jealousy” she feels towards her mother-in-law.

Jamaica: Everyone’s a Critic
Villagers line up in the street to take a look at the bride. It’s customary for them to call out negative comments if her appearance isn’t up to snuff. If the majority is critical, she goes home and makes a second try at looking good.