Begum Zakia Shahnawaz Someone To Look Up To 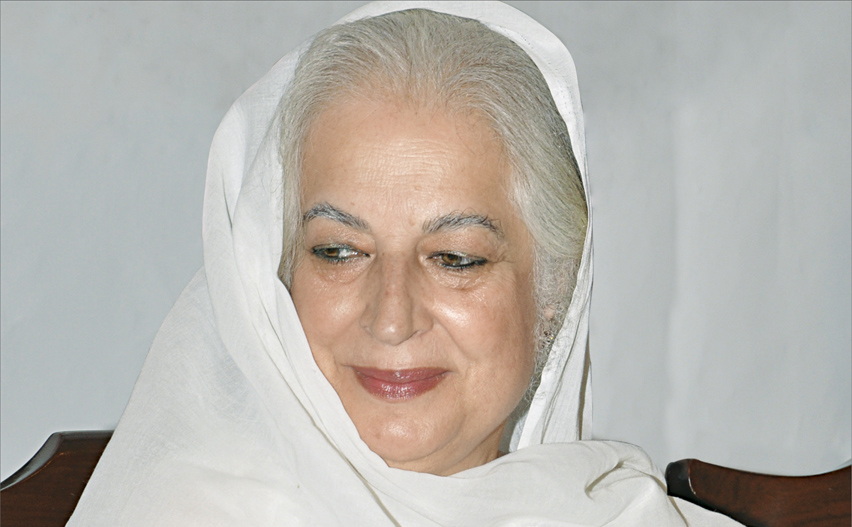 At the entrance of GOR our car is thoroughly checked for security. And moments later we are hopelessly lost in GOR, one of Lahore’s most beautiful areas, looking for the famous 8 Club Road address. Famous because it is the Punjab Chief Minister’s Secretariat. I am late for my appointment with one of his advisors who looks after, among other things, the population welfare programme- Begum Zakia Shahnawaz.

‘Ask one of the policemen, they will know, we are not looking for a needle in the haystack we are looking for the Secretariat of the Chief Minister of this province,’ I plead once again with my driver who is adamant in finding the place on his own. What’s with men and asking for directions… we make another hopeless turn as he reassures me, ‘I think it is right here somewhere.’ I am forced to use my authority and I order him to stop the car next to a policeman. I roll my window down and ask for directions. It turns out that we were headed in the opposite direction and had to make a U-turn to reach our destination. I make him stop a couple of more time because I am not willing to take any more chances and we finally find the huge black and golden gate.

We are subjected to another security check before entering the building. I find my stomach in knots. I have met the lady a couple of times before. She is one of the most graceful and well-groomed people that I know in Pakistani politics, no wait that’s hardly saying anything at all-the truth is that she is one of the most graceful person, I have ever met, belonging to any walk of life. She dwarfs people around her, not just because she is almost six feet tall, but also because she conducts herself very well.

As I walk up to the level where her office is, I wonder how many women in this country have attained such a high position in life. Begum Zakia Shahnawaz is a very well respected name in political circles. She is looked up to by members of her party but she is equally admired by colleagues in the opposition.

I finally find myself outside her grand office. There are a number of people waiting outside but the moment I arrive someone shows me in immediately. She takes her appointments seriously. I walk in to find her seated behind her desk engrossed in conversation with two young boys. I quietly take a seat at a corner waiting for her to finish before announcing myself.

The two young boys are thanking her for something, I couldn’t figure out what, but their expressions told me they were really touched by whatever sweet gesture she had made. They thank her one final time and make a move to leave. She insists that they should have tea and cake before leaving. She takes money out of her purse and gives it to one of her assistants to arrange for the tea. It is then that I realized the boys were blind. She notices me in the corner, directs a generous smile in my direction and gets out of her seat. The boys want to know if they can visit her again. She gives them her personal mobile number and tells them to call her whenever they wish to see her and she will send her own car to bring them to her office without any hassle.

We move to another corner of the room where I begin my interview. Begum Zakia Shahnawaz belongs to Essa Khel, a small town in district Mianwali. She is the eldest among her siblings. Three out of her four brothers are in politics. She has had a privileged life all along but developed a keen sense of the importance of social work at a very early stage. She got her education uptil A levels from St Dany’s School in Murree and had to discontinue afterwards because she got married at the age of 16. It was a marriage which brought her happiness in the form of a very understanding husband and two most wonderful daughters. However, she is not an advocate of early marriages because she feels it is important to give everybody a chance to experience college education.

It was very surprising for me to find out that Begum Shahnawaz had never been to college because her knowledge, her language skills and her political wisdom in no way indicates that she had to stop her formal education at such a young age.

This further reinforces my belief that wisdom, intelligence and grace may not necessary be an outcome of formal education. When Musharraf’s government made graduation necessary for political participation I had my reservations on these grounds but after meeting Begum Zakia Shahnawaz I am more convinced that unless we can ensure quality in our formal education system we should not award it too much credit. Begum Shahnawaz is a very well read woman with good taste in music, dress and food.

Begum Zakia believes that standards of education have gone down. Recalling her times she said that the education she received was far superior compared to the one provided these days. She blames the lowering standards on the fact that in the history of this country civilian governments that are supposed to work for the people ruled far less than military governments. During Martial Law the country’s development programme suffered big blows. Teachers are not trained properly, especially the primary school teachers. Another reason in her opinion is the fast growing population and lack of proper planning for the population control or management. However, adding a positive note she said that her government is working hard to bridge the gap created by years of neglect in this area. Danish school is only one example of Punjab government’s sincere effort to improve standard of education in our country. She does not agree with the criticism that Danish schools will create an elite class among poor but believes that these high standard schools will force others to improve their standards to beat the competition.

She has read all the classics from English Literature, her favourites are biographies of people like Mother Teresa and other great people like her. She has travelled the world, which is another form of education. Her marriage brought her a lot of exposure to the political world. Her father-in-law was in the assembly and he encouraged her to work for the people of this country especially in their home town of Mainwali. She realized that life is much more than a luxurious existence, it gets meaning from helping others, working for people in need.

As a young woman starting her political career she came across a poor man who had passion for medicine. She helped him in completing his education and setting up his first tiny little dispensary. Today he is one of the big names in the business. He is just one example… there are many beneficiaries of her benevolence who make her proud and give her courage and hope that a little help is all the people of this country need to fight their dire situation and break free of the shackles of poverty.

She got elected to the assembly for the first time in 1977. Ever since politics remains her major passion in life. She joined Pakistan Muslim League Nawaz Group in 1985 and remained loyal to it ever since. There is one thing that she can’t stand and that is the Lota culture in politics.

While performing her duties on the political front she never neglected her responsibilities as a mother or wife. Both her daughters are high achievers- one went on to earn a Masters and then a PhD degree from the most prestigious Harvard University of USA and her younger daughter who was good in art and culture related activities earned a degree at National College of Arts, Lahore. Now she is based in Los Angeles and promotes Pakistani art and culture in the west.

Answering a question about whether girls should opt for a career in politics or not she said that girls need to educate themselves and gain economic independence so we can earn respect in whatever area of work they join. And she said that no country could ever taste progress and prosperity until and unless its women play their full role in the development agenda of the country. Begum Zakia Shahnawaz urged the women to take part in nation building activities for the sake of our future generations. She said that government of Punjab was making all possible efforts for the upgradation of women entrepreneurs and providing an enabling environment to them so that they could be able to do business with peace of mind and maximum ease. She said that the Punjab Board of Investment & Trade (PBIT) had been tasked by the CM to facilitate the business community and it was working well. The days are not very far when Pakistan would be standing tall among the comitte of nations.