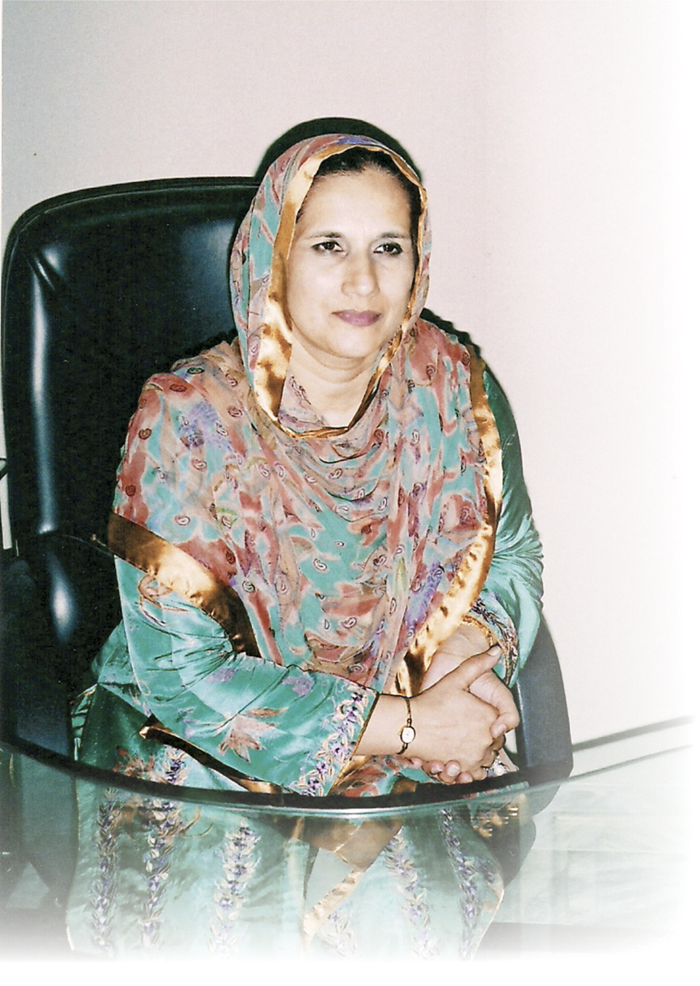 I remember Dr Samina from her college days when she was studying to become a doctor at Fatima Jinnah Medical College, Lahore. I think she was the reason why I decided at school that I wanted to join the noble profession. I wanted to be as impressive and graceful as she appeared to my young eyes. I saw her often briefly, as I was a frequent visitor to their house, coming in going out always in a hurry doing many things at the same time. She is one of those people who make you wonder from where they bring all that undying passion for life.
We all celebrated when she got her doctor’s license but she became even scarcer to find for visitors like myself once she started her job. Then I heard that her wedding was arranged with another doctor based in Faisalabad.
Dr Samina Anwar became Dr Samina Khalid and that was one of the luckiest things that happened to Faisalabad. And I will come to that in a minute… Dr Samina got a chance to work for a project ‘Life’ in Lahore that was initiated by the famous gynaecologist Dr Rashid Latif and which is known by the lay people as test tube baby. She equipped herself with appropriate training and experience in the field for 15 years and also added to her degrees a few more in the area of gynea and obs.
In her early years in Faisalabad she worked as assistant professor Punjab medical where she came to know about the people of her new city especially the women and more specifically the ones who were not blessed with God’s greatest gift to mankind – children…. one’s own son or daughter.

For years she kept witnessing the pain, frustration and anguish attached to being deprived of having a baby. And all this time with her experience and knowledge in the area she knew that she could do something for them, she could help them have babies and have a full life that they desired so much. The frustration of watching couples’ despair over infertility gave birth to a dream in her heart. Her dream was to bring the services to the people of Faisalabad which they otherwise could not afford.
When she could not remain a silent spectator to the avoidable misery of so many people she decided to quit her job that was promising with lucrative incentives and promotions, at the time and started working on realising her dream. She gave her dream the name ‘Friends’ and appropriately so because who else will be bothered enough to do something about a problem but a friend indeed. This is the first of its kind clinic in Faisalabad that offers artificial reproduction techniques. It also offers latest technology testing of uterus known as Hysteroscopy in which a mini camera in inserted into the uterus to check for any abnormalities. Among its many unique features is the special homely atmosphere which provides a comfortable environment to patients seeking treatment.

Dr Samina Khalid along with her supportive husband and partner Dr Khalid Javed decided to bring the cure of infertility to Faisalabad and make it accessible and affordable to people who wish to go through it. As one of her observation was that most couples who knew about the test tube alternative and wanted to try it didn’t opt for it because they could not afford the treatment or the extended stay it required in a different city. Very few people are dedicated enough to realise a big dream like ‘Friends’. But Dr Samina and her husband did. They established a small clinic by the name Chenab at 42 Jinnah Colony in Faisalabad and started negotiations for collaborations with the experts in the field for turning it into a full fledged fertility clinic. Dr Rashid Latif and his team were instrumental in making it happen.

As a result of endless meetings, negotiations, quality checks and procurement of equipment, ‘Friends’ has recently started functioning fully. The occasion was marked by a graceful opening ceremony to which Dr Rahid Latif and his team were also invited as special guests.
So far, four couples have undergone the advanced procedure which is called IVF. This is one of the latest techniques in artificial reproductive techniques and is rated highly because it places the fertilized capsule inside the mother so the couple feel in control of their situation and rest their minds vis a vis any possible mistakes in handling the process till the formation of an embryo. It also helps them bond with their child from the very start of the process making it closer to the natural process than it ever was in the past procedures. ‘Friends’ offer this latest technique along with the old ones including IVF etc.

‘Friends’ is now in business and its first batch of four patients treated so far, has shown a hundred percent success. Within nine months Faisalabad will have its very own baby as a result of artificial reproductive technique. I call ‘Friends’ a big dream not because to me any humanitarian cause is a big cause, but also it is quite big in the layout. Along with the normal consultation rooms, labour rooms, recovery area and waiting room is laboratory which is designed especially to provide the environment required for such sensitive procedures. All the equipment was acquired from the Galaxy Pharmaceuticals Company which is known globally for its high quality in lab set ups.
The team at ‘Friends’ is small but comprised of highly motivated, dedicated doctors and lab technicians. Dr Samina performs the surgeries, Dr Khalid looks after the male infertility section, Dr Sumera, MS in lab techniques was trained at Hamid Latif Hospital and is a certified embryologist, Dr Mohsina is a Fellow in Gynea and Obs, works as a counselor, performs check-ups and records initial history. Other than these there are a number of trained staff nurses who look after the patients during their stay in the clinic.
The cost for a full treatment depending on the age and many other factors, starts from 180000. If done in a different city you have to add the cost of living in that city for at least a month or two. The treatment requires frequent check ups but ‘Friends’ has brought this price down to a minimum of 150,000 and can go up to 250,000 depending on many factors. Sharing the worldwide statistics of infertility she said in a meeting. I chanced upon by sheer luck, that 15 per cent couples are infertile in the world and 35 per cent of these live in Pakistan. She has decided to bring this percentage down and if anyone could do it that is Dr Samina Khalid.
Dr Samina also revealed to us that usually an untrained birth attendant or a dai or in some cases hakeems with their endless totkas cause infertility among women. Fallopian tubes are as thin as a hair and when they induce some stuff in them they get clogged for life. Women panic if they can’t conceive within a month after their wedding and start visiting dais for advice. Dr Samina said that if after trying for six months the desired result is not achieved the couple should visit a doctor and first a man should volunteer to get his test done. One because it is a very easy test and second most of the problems caused by the male partners have simpler and quick solutions. If all is clear, then a woman should get herself checked and tested. And if there is a problem drop in at ‘Friends’ especially if you are based in Faisalabad.