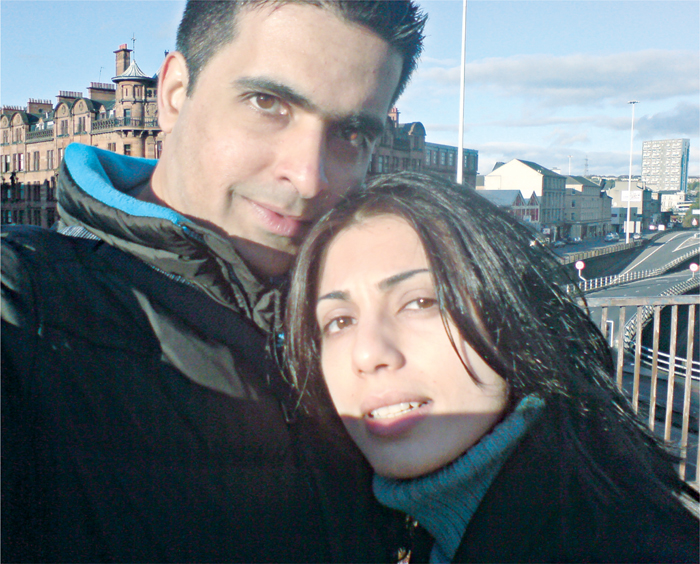 Love is all around…

Nadia Malik has had a very successful career as a fashion model. She has inspired many upcoming models with her elegance and grace. We caught up with her to get to know her a little better, after her marriage to Danyaal.

Nadia: Arranged by us!

Nadia: It was a really long time ago. Way back in 1995! Danyaal and I were both part of a stage production. I was part of the backstage team and he was one of the actors.

Nadia: I knew it the moment we met! We got along like a house on fire, and as time went by our relationship developed more and more. And the rest, as they say, is history.

Nadia: My wedding day passed in a haze. I remember going through the motions but I can’t really remember details. There is one thing, however, that I remember and that is spending the morning of my wedding day at the gym. I was so stressed that day that the only thing I thought would get me through the day was pumping iron. So, I was at the gym at 10 in the morning and spent a few hours there before getting on with the day.

Nadia: It was a beautiful gold and turquoise karra.

Nadia: Florence, Italy. We both decided on the place together because it came highly recommended by my younger sister who went to university there.

Danyaal: The entire seven days were one perfect moment.

Nadia: Hmmm… I honestly can’t remember. I’m sure I’ve blocked it from my memory!

Nadia: Florence is famous for having the best gelato in Italy. So the one thing which we did every day that we were there, was to share a scoop of gelato!

Nadia: Danyaal’s a morning person. He wakes up happy and chatty! I’m completely the opposite. I think that was probably the biggest surprise for me because I had just assumed he would be cranky and quiet like me in the morning.

Danyaal: That she’s not at all into museums, theatre or sightseeing, but would rather just spend day after day by the pool, reading and snoozing!

Nadia: I don’t think I would change anything. I have the best memories of our trip to Florence. Of course if I had the chance to do it again, I would probably travel around Italy a bit more but apart from that, nothing.

Nadia: I think I do. Most of the time anyway.

Nadia: It’s really cheesy but in our defense… we were really young then. It’s “Love is all around me” by Wet Wet Wet from the movie Four Weddings and a Funeral.

Nadia: That’s really hard to remember. To be fair it has been a few years. But I do remember that the first movie we watched together at the cinema was Ghost. It was at a time when no good movies played at the cinema and there were no decent cinemas to go to. It was great fun!

Nadia: Ummm….I don’t think I want to admit to that in print!

Nadia: I get along with all of Danyaal’s close friends really well, and they have now become my own closest friends. It would be impossible for me to choose.

Favorite activity as a couple now?

Nadia: We love to cook together!

Which was the best time of your life? Before marriage? The honeymoon or now? Or still waiting? Other?

Nadia: Definitely now! Danyaal and I are thoroughly enjoying making a life for ourselves abroad and although we miss Pakistan terribly, I think the sheer joy of being together makes up for all the times we miss having family and friends around. Besides, I come back to visit and work every few months. So I guess right now I have the best of both worlds!