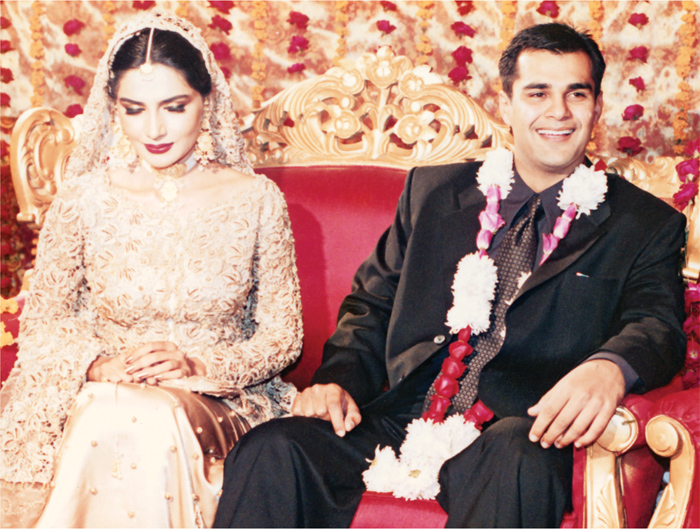 Iffat Omar is famous for being one of the very few models who have been working in our fashion industry for a very long time. She has not only modeling to her credit but also hosting TV shows and acting in dramas, among her many other projects. Let’s find out more about her and her husband.

We fell in love and with permission of our respected parents got married.

Hamein milna hi tha hamdam kisi rah bhi nikaltey. (We would have met no matter which path we chose for ourselves.)

You don’t decide such things, its destiny and it happens.

Nothing at all – I was in a trance.

Omar Sayeed’s bridal dress. We were not or talking terms at the time and we both regret it very much.

I guess the conception of Noor-e-Jehan, my daughter, besides the diamond ring.

We had it much later as I was immediately pregnant with my sunshine (Noor-e-Jehan) and couldn’t travel. Much later we went to London and since then almost every six months we have a honeymoon (hubby is compensating for the one we never had).

What was the one perfect moment of your honeymoon/honeymoons?

The best moments were sometimes at Tiffanys, Saks, Bond Street and usually at Louis Vuitton stores.

Usually when traveling, people at the airport carry one or two bags and Omar is always carrying 6 bags and cursing me.

What was the most shocking thing about her which you discovered on the honeymoon?

Omar: She has an ability to make a decent man bankrupt in 10 minutes.

What was the most shocking thing about him that you discovered on the honeymoon?

Iffat: He can convert dollars into rupees in one second.

The one thing you would change about your honeymoon if you had the chance?

None whatsoever at all.

Iffat: For the first 7 years him and now its me.  Roles have been  reversed and I am loving it.

Killing me softly with your words.

Titanic- I loved it. He hated it. Story of my life as far as choice in movies is concerned.

Hey what are you trying to do here?

Both of our nunds (sisters-in-law). We have amazing fun with them and they are  exceptionally great human beings.

Favourite activity as a couple now?

Each day is blessed. Masha Allah! Could’