Your Bite Of Turkish Delight 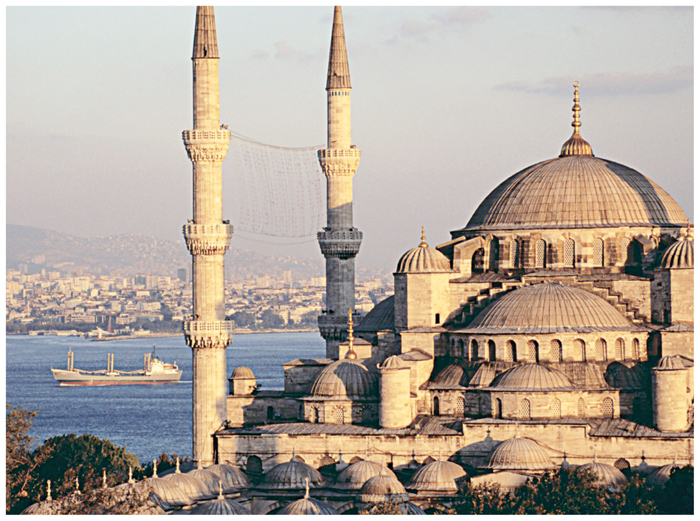 Turkey’s landscape is dotted with battlegrounds, ruined castles and the palaces of great empires. This is the land where Alexander the Great slashed the Gordion Knot, where Achilles battled the Trojans in Homer’s Iliad, and where the Ottoman Empire fought battles that would shape the world. History buffs can immerse themselves in marvels and mementos stretching back to the dawn of civilization. But if you want to simply unwind, spend an afternoon being pampered at a hamam, or let the warm waters of the Mediterranean coast lap at your toes, you can get all that as well. Istanbul’s markets and bars are among the most stylish and atmospheric, and the modern Ottoman cuisine rates as the tastiest, in the world.

William Butler Yeats regarded Byzantium (Istanbul’s original name) as a “beauty outside time.” Despite where the travel guides lead visitors, it is not just a living museum, but a vibrant, cosmopolitan and modern city that happens to have an impressive historical pedigree. This city has always harboured the extremes of wealth and poverty, religion and paganism, hedonism and asceticism. It is known globally for its hamam bathhouses and sensual kicks but also for its great houses of spirituality, which are everywhere in the oldest parts of town.

Istanbul is hot. And we’re not talking about the weather. It is to the ancient quarters of Sultanahmet, Beyazit, Fatih and Eyup that most visitors to Istanbul flock, and for good reason: Imagine Notre Dame Cathedral, St. Paul’s Cathedral and St. Peter’s Basilica within one square kilometre, right next to a natural harbour as beautiful as Vancouver’s. The scale of the treasures they hold is impressive. The city’s collection of ancient relics is remarkable, but beyond that there is also an entertaining, culturally and modern part, that most tourists never see, a city that is very much in the now.

In Beyoglu-Taksim, Istanbul’s “downtown,” there is a surprising cross-section of humanity. On the same stretch of the crowded Istiklal pedestrian street, you might find conservatively dressed yuppies, neon-coated club-goers, pious Muslims in long coats, and the occasional bemused tourist.

Following is a brief list of popular places and activities which are not to be missed in Istanbul:

One of the most enjoyable, and certainly the most romantic, night-time activities in Istanbul is to take a Bosphorus ferry. Enjoy the view back to the Old City, the twinkling lights, the fishing boats bobbing on the waves and the powerful searchlights of the ferries sweeping the sea lanes.

Scene of horse and chariot races and the centre of Byzantine civic life. It was the place where the Nika Riot started in 532 AD. There are an Egyptian Obelisk, a stone obelisk and the Serpentine Column which were originally brought by the emperors and used for the decoration of the Hippodrome.

The jewel in the heart of Istanbul’s Sultanahmet area is the Aya Sophia. With its magnificent dome, it was considered one of the great architectural miracles, and went through incarnations as a church, a mosque and now a museum. The remarkable structure with its 56m high immense dome houses both Christian and Islamic art.

With this mosque, Sultan Ahmet set out to build a monument that would rival and even surpass the nearby Aya Sofya in grandeur and beauty. So enthusiastic was the sultan about his grand project that he is said to have worked with the labourers and craftsmen on site, pushing them along and rewarding extra effort.

Slightly creepy lighting gives the underground water system of Basilica Cistern, built by the Byzantines in the sixth century and were still in use until 100 years ago; an other-worldly atmosphere that kids love. The cistern’s raised platforms take the visitor between huge columns while carp swim in the waters below. Look out for the huge stone Medusa heads.

There is the myriad of bargains and treasures to be found at the dizzying Grand Bazaar (Kapali Carsi), at over 500 years old and with about 4,000 shops, it has a buzz like no other market in the world. It’s divided into many sections such as leather, rugs, souvenirs, copper, antiques, textile etc. There are 18 gates and 60 streets inside. Other than interesting jewellery or coffee pots on sale, there is a great attraction for kids as their faces will light up at the sight of lokum (Turkish Delight). And with the Turks’ indulgent attitude towards children, you’re likely to get some free samples.

Built in the 17th century next to the Golden Horn, the Spice Bazaar is the second largest covered bazaar in Istanbul. Originally housing shops selling medicine and spices, the Spice Bazaar continues to fulfill its original function. This distinguished example of Ottoman architecture continues to sparkle with life even today.

Anadolu Kava is a pleasant spot in which to wander and have a seafood lunch at one of the touristy places on the square in front of the ferry terminal. Perched above the village are the ruins of Anadolu Kavagi Kalesi, a medieval castle that originally had eight massive towers in its walls. First built by the Byzantines, it was restored and reinforced by the Genoese, and later by the Ottomans.

Rising majestically over the traffic on busy Atatürk Bulvar, this limestone structure is one of the city’s most distinctive landmarks. Visitors often gasp in amazement on seeing it for the first time.

Miniaturk is also named as the “Showcase of Turkey”, where you can find many important structures of Turkey in small scales, models of architectural masterpieces representing the Anatolian and Ottoman civilizations.

Models of 105 historical and architectural works, all made in the scale of 1/25, including the Library of Celsus at Ephesus, the Malabadi Bridge in Diyarbakir, Grand Mosque of Bursa, the Tomb of Mevlana in Konya, Dome of the Rock (Masjid-e-Aqsa), the Church of St. Antoine in Istanbul, the Ottoman galley, Savarona (Ataturk’s boat), the Underground Cistern (Yerebatan), Stone houses of Mardin, Fairy chimneys of Cappadocia, Ataturk’s Mausoleum in Ankara, Aspendos theater in Antalya, Hagia Sophia and the Maiden’s Tower of Istanbul, can all be seen in one single place. There is also a miniature railway network, a motorway with moving vehicles, an airport with moving airplanes, thousands of human figures, and ships sailing across the Bosphorus. These dynamic models make Miniaturk a living park. Built in 2003 on a 60,000-square-meter site in the Golden Horn, it is the largest miniature city in the world and has attracted lots of interest and is located opposite the Pierre Loti Coffee House in Eyup district, a favorite with tourists.

This museum is located in the Hunkar Kasri (royal residence), which stands north of the Sultanahmet mosque (known as Blue Mosque) complex. Hunkar Kasri was the place where the Sultan used to rest before he would join the prayer in the mosque. The museums has unique pieces of old Ottoman rugs and kilims.

For a wonderful museum experience try to visit in the afternoon so that you can enjoy the concert given by the Mehter, the medieval Ottoman Military Band. On the ground floor are displays of weapons, a ‘martyrs’ gallery with artifacts from fallen Turkish soldiers of many wars, displays of Turkish military uniforms through the ages, and glass cases holding battle standards, both Turkish and captured.

This is one of the grandest of Istanbul mosques. Experts rate it as one of the most important Ottoman mosque complexes in the country.

On the waterfront across the Bosphorus Bridge is the grand Beylerbeyi Palace. Look for its whimsical marble bathing pavilions on the shore, one was for men, the other for the women of the harem.

Situated on the Asian side of Istanbul, this 262 metres hilltop park with a crown of pine trees, provides a panoramic view of the city and has nice cafeterias to enjoy Turkish tea or coffee. It is also a well known spot for watching migrating birds over the Bosphorus.

Büyük Göksu Deresi and Küçük Göksu Deresi (Small Heavenly Stream), are two brooks that descend from the Asian hills into the Bosphorus. Between them is a fertile delta, grassy and shady, which the Ottoman elite thought perfect for picnics. Foreign residents, referred to the place as ‘The Sweet Waters of Asia’.

The weather in Istanbul is mild. Sharp winds are almost absent. With about 300 sunny days per year in Istanbul, Spring (April to May) and Autumn (September to October) are the best times to visit, since the climate will be perfect for sightseeing in Istanbul.

Turkey is no longer Europe’s bargain-basement destination, but it still offers good value for money. Wait until you arrive in Turkey to change your money into lira since you will probably get a better exchange rate. US dollars and Euros are the easiest currencies to change.

The approximate rates are as given below:

Although Turkey is by no way a dangerous country to visit, it’s always wise to be a little cautious. Be wary of pickpockets in buses, markets and other crowded places. Keep an eye out for anyone lurking near ATMs.

Call any travel agent. Normally these companies will be able to assist you in obtaining a visa. The agents in Pakistan would normally charge about PKR 10000-15000 for a visa including the Visa Fees. The validity of the visa depends upon the hotel booking slip which you need to send in for visa process and your visa will be valid for the duration of your stay. The process itself takes 15 days. The economy airfare from Lahore through Karachi to Istanbul is PKR 65000/person approx.

Here are a few ideas for the economy traveler. Check them out on the internet.

2- Ciragan Palace Kempinski Hotel Istanbul: It’s right on the Bosphorus shore next to a restored Ottoman palace, but distant from most other attractions. Only half the rooms have Bosphorus views.

3- Four Seasons Hotel Istanbul at Sultanahmet: Best location for sightseeing, it’s a historic building right in Sultanahmet. No Bosphorus views from the guest rooms, or swimming pool, but it’s an ultra-posh place.

4- Istanbul Hilton Hotel: The grand dame of Istanbul hotels set in 5 hectares of hilltop gardens with fine views, a great pool, a 10-minute walk to Taksim or Nisantas shopping and nightlife.

5- Swissotel, The Bosphorus: Excellent Bosphorus views with a 15-minute walk to Nisantas shopping and nightlife.

So get geared up and go explore this wonderful historic place which will entrance you with all the magic it holds in itself. Bon Voyage!