From Our Archives: Anushka Sharma On a New High 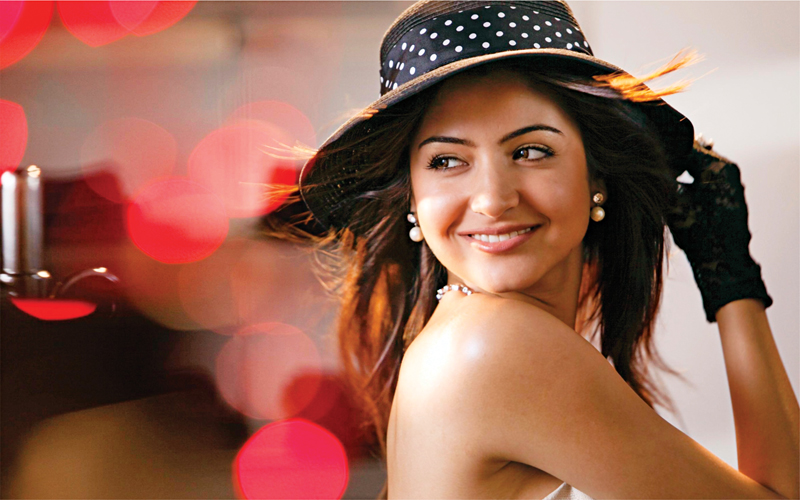 Actor Anushka Sharma is enjoying her Bollywood innings to the hilt. The actor who made her mark with a debut stellar performance in Shah Rukh Khan starrer Rab Ne Bana Di Jodi has maintained a good run in Bollywood. She’s starred in the surprise hit Band Baaja Baraat with alleged beau Ranveer Singh and got rave reviews for her near natural acting. Anushka is currently shooting for Vishal Bhardwaj’s next along with Ajay Devgn. ‘I am also doing another film which is titled under the Yashraj banner.’

Critics have consistently maintained that Anushka’s girl-next-door image is the biggest draw that works in her favour. As an affirmation of her dream run in Bollywood, Anushka though a few films old is already being compared to the league of established top heroines. It is an honour that Anushka says she is flattered about.

The actress talks to Brides & You about movies, the magic of Bollywood and her rumoured now-on, now-off relationship, with Bollywood’s new hottie Ranveer Singh.

‘I am totally loving this mad rush of Bollywood. This is something that I always wanted to do. I was only 18 when I started doing films and though at that time a few of my friends said that it was too early, it turned out that it has been for the best. Though I began at 18 by the time my first film was released I was 20. Today at 23, I am happy about the films that I have already done and happier about the fact that I can take many things a little slow. I don’t have to worry that if I let go of one role I may not get another one too soon.’

But how does she react to the fact that today she is being compared with established actors. ‘While it is a good feeling, I still think I should not be comparing myself to actresses like Kareena and Katrina. They have been in the industry for 8-10 years, have done many more movies than I have so surely their positioning is different. Having said that, I admit that I am aware of the competition around me. I am compared to very talented actresses. So if I say I am not bothered about competition I would be lying. My mantra is to work doubly hard to secure my spot under the sun.’

Apart from the meaty roles Anushka is also becoming the new hot property for endorsements. ‘Yes I have a few endorsements coming my way. I have certain rules like I won’t ever endorse fairness creams as I do not believe in this whole mindset of only-fair-girls-look-pretty. I am also not comfortable endorsing something that I am not convinced about.’

Anushka once said that before she joined films she thought that with makeup she could look as good as Aishwarya or any other heroine! Commenting on it she says, ‘Yes I did say that. You see till the time you haven’t seen yourself on the screen you really don’t know how you will look. It’s only afterwards that you realise what you actually look like. I was never into makeup and I still am not. I am just getting used to all this rouge and pancake.’

The media has often reported about her relationship with the Band Baaja Barat co-star Ranveer Singh; let’s see what she says about it. ‘Ranveer is a friend. He will always be one. The rumours started probably because we were doing a film together and spent a lot of time with each other. However, now both of us are doing our respective work we don’t really get so much time to meet.’

With fame also come controversies. Insiders claimed that a cold war was brewing between her and Sonakshi Sinha. As Sonakshi was getting close to Anushka’s alleged ex Ranveer Singh. ‘I don’t even know Sonakshi properly. I have just formally met her once or twice. I have only heard about her work in Dabangg. And I have not even seen Dabangg. She is a new actor like me and is trying to find her place just like me. She too would be more interested in concentrating on her work rather than in any controversies. As for me I am not affected by any such reports or remarks. But I do ensure that I do not make any callous remark about anyone. It has been a good going so far and I hope it continues.’