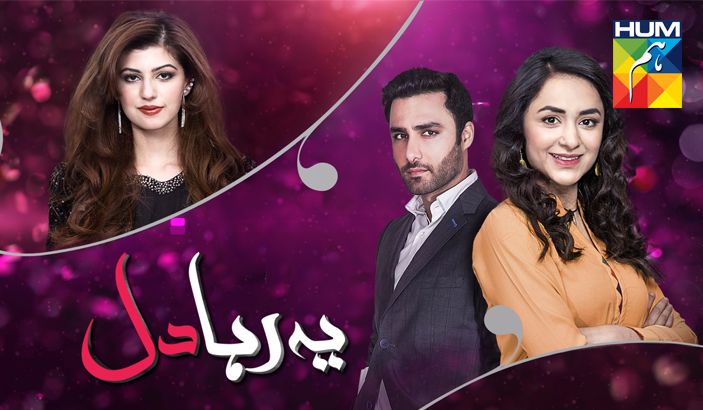 Yeh Raha Dil is a Pakistani drama serial which aired on Hum TV on 13 February 2017, starring Ahmad Ali (Zaki), Yumna Zaidi (Hayat) and Anum Ahmed (Nida) as main leads. It is produced by Momina Duraid and written by Mustafa Afridi.

Hayat is a carefree young girl who has high ambitions in life. She wishes to travel the world and write books. Her life is not perfect but she is satisfied with it. The audience feels that at times her dress sense is quirky and leaves a bad after taste but given the kind of role she plays it suits her.

Things take a turn when Hayat meets Zaki. Zaki who initially cannot stand her ultimately falls in love with her.

On the other end, Zakis fiancée Nida cannot take the pain of being rejected again (she has already been dumped once) She is a model and with Jimmy’s help (her confidante and strength) she devises a plan to get to Zaki.

However her plan fails. Zaki tells Hayat that he loves her and tells Nida that he cannot marry her.

What will happen next? How will Nida react? Will Zaki and Hayat get together? Will Hayat accept Zaki’s proposal? These are a few questions that go through the minds of the audience! So stay tuned to Hum TV every Monday at 8 p.m. to find out more!

The play is full of moments of humour and emotional weaknesses. At one point Zaki’s father says after Zaki has told Hayat of his feelings  “aik ungli tu aik behan nai kuchal di hai..kaheen doosri doosri behan na kuchal dai.” The audience is sent into a fit of laughter. It is a perfect moment of comic relief.

Similarly an example of emotional weakness is when Nida walks the ramp with tears in her eyes. One can feel the pain she’s going through.

The play is well directed and the characters play their role with utmost finesse. It does not feel like the characters are forced into the roles rather they slip into then naturally