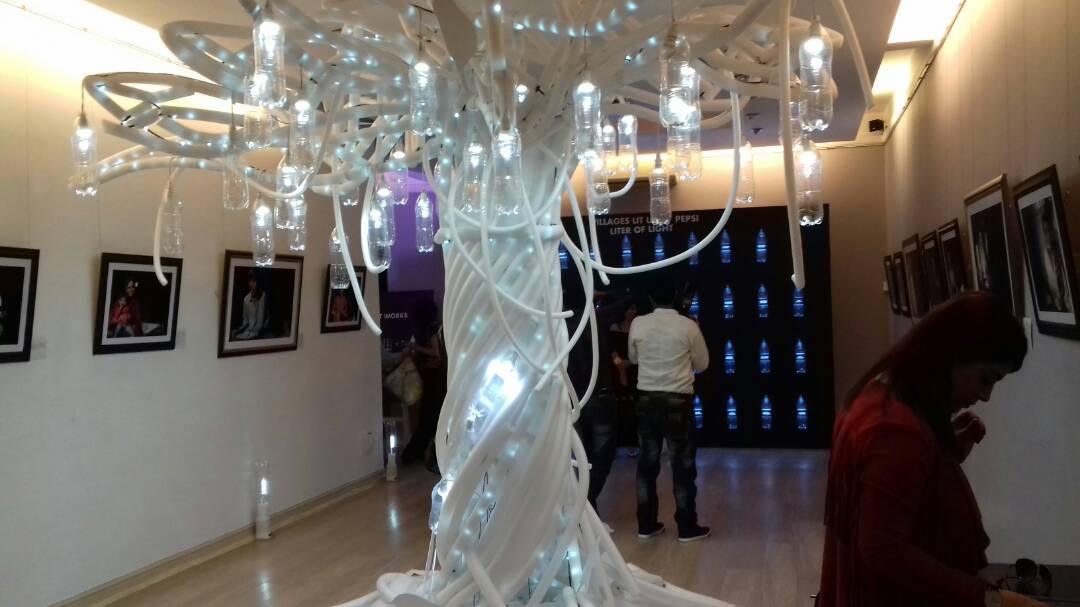 ‘Pepsi Liter of Light’ is a campaign that was started by Pepsi two years ago. Its mission is to take light to as many rural areas of Pakistan as possible. Villages of and around Kuhushab, Thar, Chaman, Chitral, Karachi, Islamabad and Thatta are a few places where this campaign has been executed.

The event was held in Ejaz Gallery Lahore where a photo exhibition and book launch of the book “Stories of Light” with regard to this concept was held. The photo exhibition mainly exhibited the works of the photographer Mobeen Ansaari. Some photographs were also taken by the locals of these areas and some by members of Pepsi team.

The event was organized by Mr Shehryar of the event managing company JBN Jaws. The beautiful décor in greens and white was also managed by them.

Mobeen Ansari mainly covered the area of Khushab. He is basically a portrait photographer and collaborated with Pepsi to make portraits using the liter of light.

Each photograph that was exhibited had a poignant story behind it. Pepsi provides rechargeable light batteries to areas where there are extensive power outages or absolutely no light. It helps students to study, housewives to run their chores and facilitates labourers in their jobs. A number of helpless people have been helped by this campaign. It is a charitable cost that must be supported. Change can only come when we raise our voice against the social ills and evils and put our hand forward to help the under privileged.

Pepsi comes up with the logo “Eyes closed for light.” It primarily wants the audience to close their eyes for 10-15 seconds to experience the darkness that the people of rural areas feel. Pepsi with the help of its plastic bottles creates emergency lights for these people hence bringing about a positive change in their daily routines which were filled with darkness earlier on.

The event was attended in full spirits by the youth and celebrities. Cybil Chowdry hosted the event. In addition Meera Sethi, Adnan Siddique, Mahvish Hayatt and Atif Aslam were also present to appreciate the work being done by Pepsi.

Talking in context with the purpose of the campaign, Meera very aptly talked about the connection between wound and light. She tells us that light only comes after you have been wounded, for after every night and dark hour comes a new day and light. She ends on the note: “To live is to change, to change is to evolve and to evolve is to understand the meaning and texture of your wound.” So hardships in life teach you how to overcome the difficulties of life.

The Marketing Director PepsiCo, Salman Butt, further talked about this movement and said that, “We started the campaign two years ago in a bid to bring a real difference to the lives of Pakistanis. Since the beginning of Ramadan this year, we started our campaign of installing lights with the aim to impact at least 30,000 lives or more just this year. Our goal is to pull Pakistani people out of darkness and improve their quality of life. In this effort so far we have installed a number of street and portable lights in the areas surrounding KPK, Gilgit Baltistan, Balochistan, Sindh and Punjab from June till October. We aim to do more through this campaign each year to make life easier for all the people living in darkness in Pakistan”.

A campaign that supports a good cause, Pepsi Liter of Light deserves all our praise.