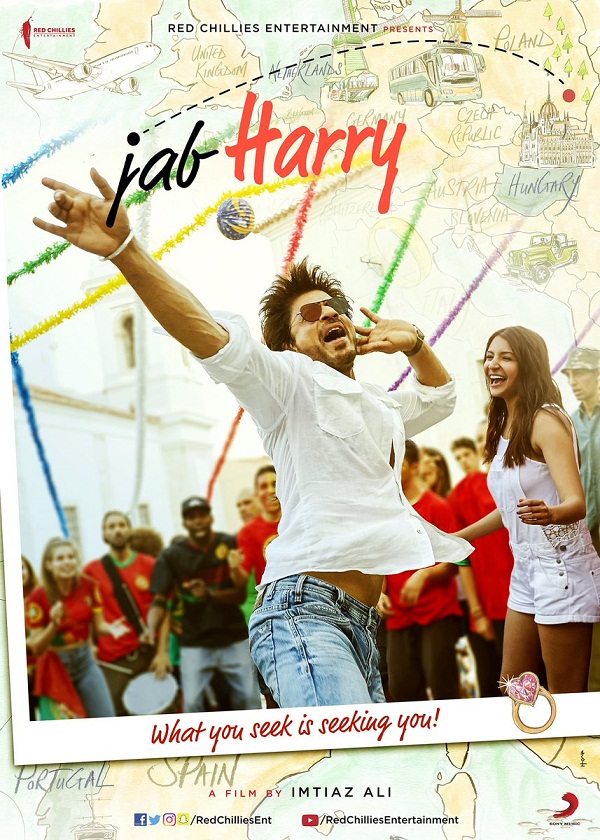 Jab Harry met Sejal is an Indian romantic comedy written and directed by Imtiaz Ali, who previously had movies like Rockstar and Tamasha to his credit. The name of the movie, oddly reminds one of another one of his hit Jab we met. Girl meets boy and they travel together seems to be the underlying theme, Imtiaz Ali is fond of. The female lead meets the male protagonist, shares a quirky and profoundly life-changing few days with him, and eventually ends her existing long-term relationship as a result.

Shahrukh Khan (Harry) is a tourist guide who has a care free attitude towards life but is helpful and friendly. As Sejal (Anushka Sharma) comes across him she tells him of how she must find her engagement ring which she has accidentally lost. The story revolves around a travel sequence   all the way from India to Europe in search of the ring. The story takes an interesting turn when Shahrukh Khan is beaten by criminals who they reached after a series of investigation, thinking that he had the ring. While bandaging Harry’s wounds Sejal accidentally opens her bag and the ring falls to the floor. Sejal is over whelmed by the concern Harry showed towards her. She hides the fact about the ring from him.

In a play of words and actions it is revealed that both have feelings for each other. However, Harry is not well off and is scared of telling the truth about his back ground to Sejal. He feels they could not become one because of class difference. Sejal tells Harry that she is getting married on the 25th of November and asks him to attend her wedding.

In a series of back flashes the entire rendezvous with Sejal is brought in front of Harry’s eyes. Harry vows to go to India but with a heavy heart. The story takes an exciting twist from here. Whether or not Harry and Sejal are united, I leave that for the reader to speculate.

The dialogues waver somewhere between denial and acceptance. Shahrukh Khan cannot bring himself to admit his love for Sejal. The film basically has ‘destiny’ as its main theme. Harry and Sejal were destined to meet and whether or not fate will unite them or not is a question that I will let the readers decipher for themselves.

Anushka Sharma plays the role of a cute girl who is naive and innocent.  She looks beautiful and has an amazing sense of humor and wit. The seemingly oddly paired couple in terms of age actually look fantastic on screen.

The songs are catchy and the dances are energetic, the typical Punjabi bhangra. As both Harry and Sejal are Gujrati, the dialogues they deliver are in khalis gujrati and give a comic effect.

On the whole, a great and light entertainment which will send the audience into fits of laughter.