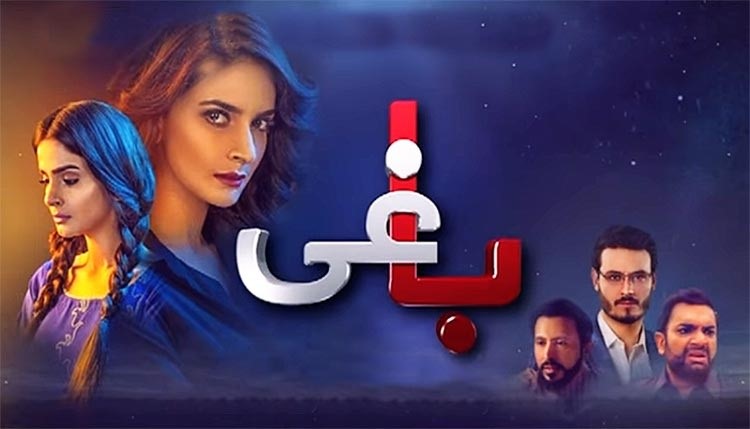 Qandeel Baloch, a very attractive young woman, caught the fancy of the Pakistani social media with her challenging and salacious pictures and videos on social media, breaking the invisible barriers of what is considered acceptable and proper in this relatively conservative society. The cocktail of sensationalism surrounding her became volatile, when she was murdered following the appearance of images of her consorting with a well-known maulvi (religious scholar). Regarded as a casualty of the contradictions and hypocrisy of society, she has become a cause celebrity and ideal subject matter for the television serial, ‘Baaghi.’

This drama serial of Urdu 1 is airing every Thursday and delivering more than what had been promised! It has a stellar cast, with the fiercely independent Saba Qamar of Hindi Medium fame in the lead role, Sarmad Khoosat and Osman Khalid Butt. Written by Shazia Khan and directed by Farooq Rind, ‘Baaghi’ is about the transformation of a poor village girl, Fauzia Azeem, into the social media sensation who acquired the name Qandeel Baloch.

Born in a small village of Dera Ghazi Khan district, Fauzia Azeem had six brothers and six sisters. Chances to succeed in life were few due to the limits of both poverty and gender. Hardly educated, Fauzia was a rebellious spirit with ‘big’ dreams of going to the city to work to support her parents in their old age. These dreams were cut short when she got married to Aashiq Hussain, a mango-plucker from Kot Addu. In 2010, she ran away from her abusive marriage and took shelter in a Daar-ul-Amaan (a community centre for the homeless). She started doing small-time acting, singing and modeling and despite all the obstacles that a girl from an underprivileged background is likely to face, she burst into stardom with a new identity three years later.

‘Baaghi’ intends to highlight how the same society which shut all doors of an honorable living on Fauzia Azeem was later judgmental about her rise to fame. Saba Qamar dives into her character and delivers easily which is one of her best performances. She duplicates the language of the region and with every action symbolizes the confidence and boldness associated with Qandeel. Just as Qandeel was a force to be reckoned with, Saba Qamar is an actress who consistently pushes the boundaries. She alone could turn ‘Baaghi’ into a blockbuster, but other actors have also been chosen mindfully. Sarmad Khoosat, the lazy older brother, Nadia Afghan, his complaining wife, and Ali Kazmi, the husband-to-be of Fauzia, all easily slip into their characters.

This drama is not only for entertaining purposes. It has some other basic motives deep down. The drama wants you to get awareness and to educate its viewers.

The major goal of this drama is to highlight the unfairness exploiting the name of honor. The drama makes you think about the other side of the story. It tells you that your main motive should be to try to get the reality and to avoid passing judgments.

Until now 13 episodes have come and everyone is loving Saba Qamar’s acting skills. Keep watching Baaghi to know what happens in the next episodes!