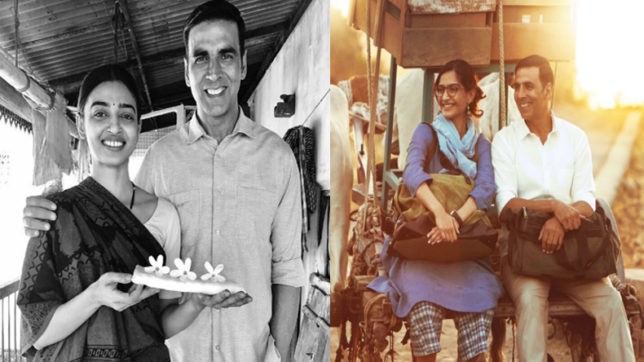 Ever since the release of its trailer, Akshay Kumar starrer ‘Padman’ has become one of the most anticipated films of 2018. Now, the makers have released ‘Aaj Se Teri’, the first song from the film which features Akshay Kumar and Radhika Apte.

Amit Trivedi’s melodious composition breathes life into lyricist Kausar Munir’s words. Sung by Arijit Singh, the song gives us a window into Kumar and Apte’s marriage, which is as harmonious as it gets. Set in rural India, the song captures Apte living a life of complete domesticity, which is made more comfortable with an incisive Kumar and his innovations. Akshay Kumar, who plays the role of social entrepreneur Arunachalam Muruganantham, sets the pace of the story right, as he plays the perfect husband to Apte in the song.

‘Padman’ is an adaptation of a short story written by Twinkle Khanna in her second book The Legend of Lakshmi Prasad. The film is jointly produced by Akshay Kumar’s Grazing Goat Pictures, Twinkle Khanna’s Mrs Funnybones Films and Balki, Gauri Shinde’s Hope Productions. ‘Padman’ is slated for a 26 January release.

Listen to the song here: