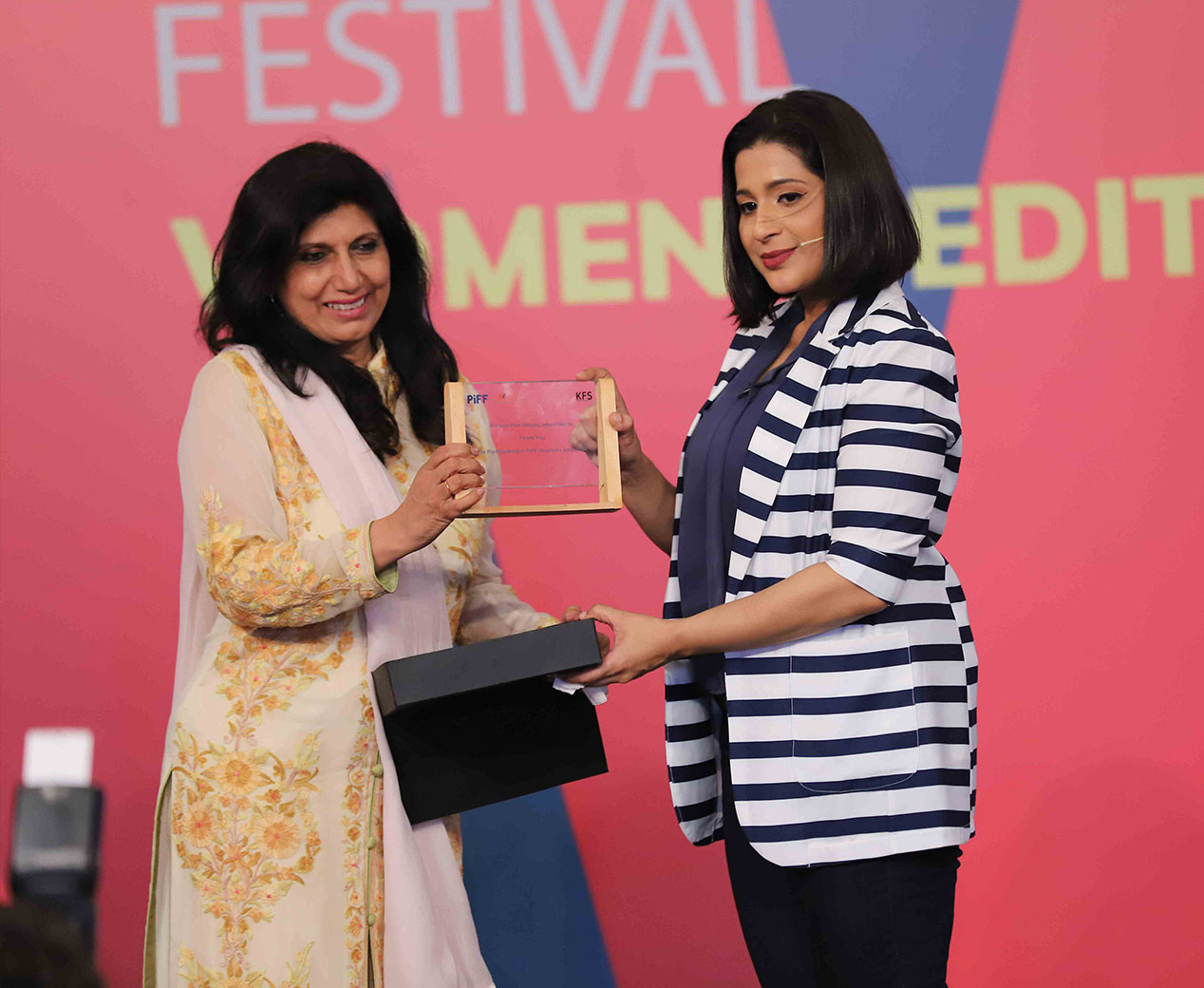 After a successful panel discussion on day 1, the second day of Pakistan International Film Festival 2021 Women’s Edition, began with a workshop on Fighting Harassment at the Workplace, followed by a panel discussion on Covid-19: Challenges & Opportunities, Understanding the ‘New Normal’. The workshop and seminar were attended by Federal Minister for Information and Broadcasting Fawad Chaudhry, Governor Sindh, Imran Ismail, as well as the founding members of KFS and the media fraternity.

The workshop on Fighting Harassment at the Workplace was conducted by Xenab Ansari, giving her experience to spread awareness about harassment and teaching attendees how to protect themselves. She also shared her skill-set and knowledge on the subject. Dr. Fouzia Saeed, Director General PNCA and member of the board of governors KFS was the chief guest at the workshop, who also shared her experience on the topic.

Sultana Siddiqui, President KFS in her opening remarks thanked the media fraternity of their support and said that the purpose of this programme is to teach and transfer our knowledge and experience to the younger generation. She also spoke about the portrayal of Muslims and Islam in foreign movies and the need to counter islamophobia in our productions. She also pointed out that Karachi is the hub of arts, media and entertainment and requested the help of the Federal Minister and government in further developing it.  The panel discussion on Covid-19: Challenges & Opportunities, Understanding the ‘New Normal’ was moderated by Sidra Iqbal, a celebrated broadcast journalist, youth icon and media communication expert and the panel for the discussion comprised Senator (r) Javed Jabbar, Filmmaker and Intellectual known in the field of media and literature; Dr Fouzia Saeed, a social activist, gender expert, trainer/facilitator, folk culture promoter and author; Ameena Saiyid, Head of publishing company Lightstone, former MD of OUP and founder of Adab Festival; Amin Hashwani, the founder of Charter for Compassion Pakistan, a businessman and a social activist; Dr. Farah Essa Zaidi, Director Radiology at Dr Essa Laboratory & Diagnostic Center and the founder of Dr Farah Essa Academy; Duraid Qureshi, Co-Founder and CEO of HUM Network Ltd and Fizza Ali Meerza CEO FilmWala Pictures and an active member of the Executive Body of the Pakistan Film Producers Association.

The panel discussed issues and challenges related to Pakistani films and entertainment industry post covid-19, the portrayal of women in Pakistani media, access of the lower and middle class to cinema, the need to establish a digital entertainment platform and challenges in adapting to the new normal since Covid-19.

Following the panel discussion, the Federal Minister for Information and Broadcasting, Fawad Chaudhry, delivered a keynote speech. The Federal Minster appreciated Sadequain’s work and his mural at the Frere Hall and the need to highlight and appreciate artists with such passion. Commenting on the title of this year’s PIFF, the minister said that men had the upper hand over women for thousands of years but with the advent of technology and public awareness, the gender disparity is gradually lessening.  Giving example of his own daughter who wants to be a fighter pilot, the minister said that women now are opting for roles which were once considered unconventional. While expressing his views on the decline of Pakistan Film Industry after the 80s’, the Federal Minister said that the biggest factor was the Soviet invasion of Afghanistan. ‘Countries move up or down together. Television, entertainment and other industries progress in countries that are progressing themselves’, he added. While commenting on government facilitation, The Federal Minister said that we are coming up with a film policy which focusses on lessening the electricity charges for cinemas, zero taxes on the film industry and government loan of up to 50 million for film-makers among other amenities. The minister also spoke about the government’s intention of establishing the most advanced and state-of-the-art Pakistan University which will offer courses on journalism, animation, music and other media related fields. The Federal Minister also urged film-makers to focus on Turkey, Saudi Arabia and the Middle East as an alternative to counter lobbies that don’t allow Pakistani content to run on international streaming platforms.

Founding member of KFS Mr Sirajuddin Aziz closed the session with his remarks on the talent that our country has. While mentioning the blockbuster productions of yesteryear, Mr Aziz said that if given the opportunity and right tools, our youth can do wonders and make this country proud.