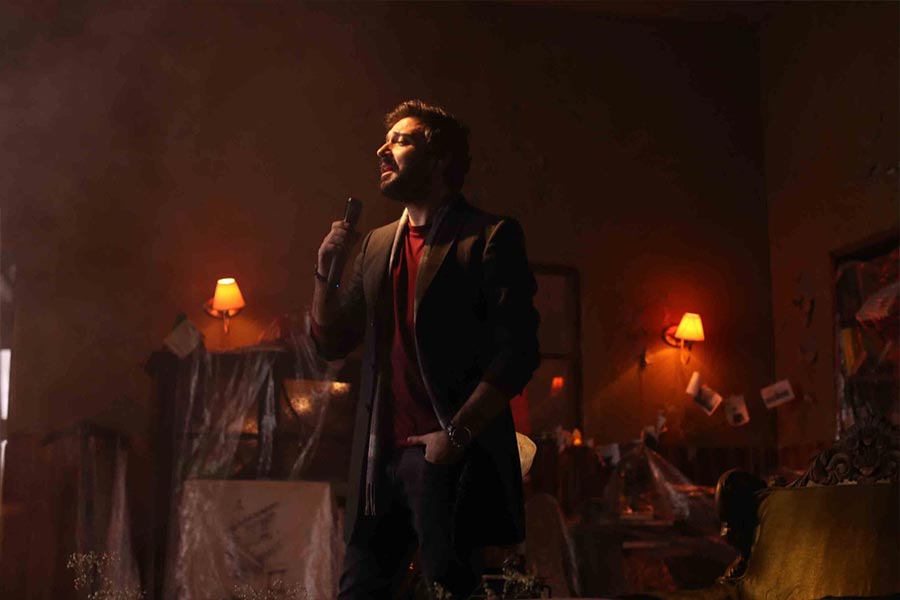 Local folklore speaks of a bird in eternal search for a moon that will not show itself. The longing of the Chaand and Chakor was the visual spark for Production Designer Hashim Ali in Season 14’s Mehram.

It’s a good reference for this sonic and visual stunner by Asfar Hussain and Arooj Aftab. Mehram reveals the emotional carnage brought by loss, helped by an unsettling drone effect winding through the song. The pairing of Asfar and Arooj’s voices creates a dark aural cushion, making you feel what Associate Music Producer Abdullah Siddiqui describes as “collapse-on-the-ground-earth-shatteringly-devastated.”

Xulfi was clear Coke Studio season 14 needed this. He said “I wanted a song that’s heart wrenchingly beautiful. For me, Asfar Hussain’s writing is exactly that. I called him and explained to him a story that I had in mind. That day we both broke down talking about the narrative and I knew we were onto something honest and magical. Arooj came into the picture while we were looking for a voice that just tells the story of abandonment, conflicting yet heartfelt point of views, along with Asfar in an intense yet calming and sort of a visual kind of way. It’s as if you can see every word that’s sung. Arooj was perfect for it; she added her musical sensibilities to Mehram. Abdullah Siddiqui has done a remarkable job carving a unique musical personality for this song. I honestly can’t be happier with the result, though the song put me in a sad trance throughout the creation process.”

Asfar uses the word “mehram” in its truest sense: a person that you trust completely. He described the song as “a vessel of thoughts, where you start to think; what was life like before you knew and trusted this person? And what is life like after this person is no longer in your life?”

Video Director Murtaza Niaz places the artists in rooms coated with neglect. Furniture is toppled over and photos and books gather dust with memories of love buried beneath. When the artists finally come together the surroundings grant no relief.

Mehram is a testament to a bond that leaves its mark ever-so-deeply; a revelation of emotions, abandonment and conflicting yet heartfelt conversations that never really leave us

Mehram can be viewed here: https://youtu.be/BUm_hFMlsgg and streamed on Spotify at: https://open.spotify.com/genre/0JQ5DAqbMKFQ0zHsfXlNmV
The fourth song from Coke Studio Season 14 was released on 30th January 2022.