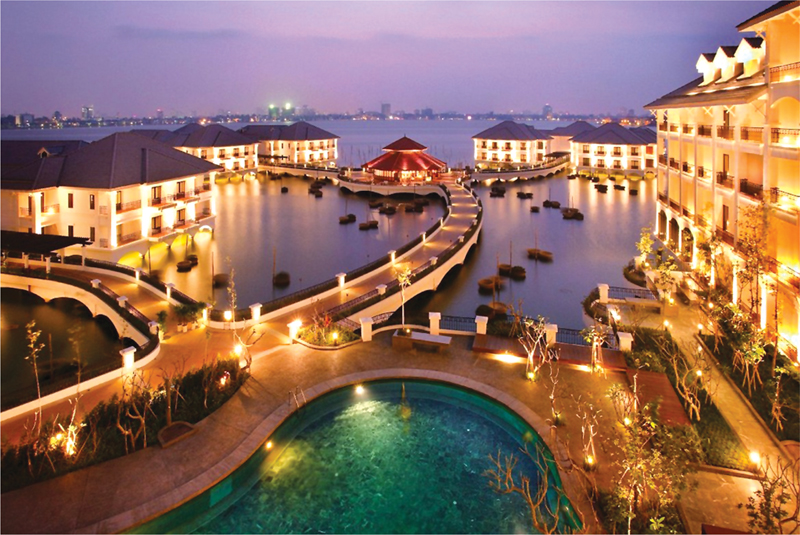 Amsterdam is a hot destination in April. Locals celebrate King’s Day on April 27. It is one of the world’s biggest street parties, celebrating the Dutch royal house and King Willem-Alexander. April also marks the start of the city’s beautiful tulip season. We recommend that you take a leisurely stroll through Keukenhof Spring Gardens.

Hanoi, which is way up north, a bit inland from Vietnam’s coast, is one of the few cities in Southeast Asia where it is nice in April. Nearly everywhere else it is sizzling hot and humid. Hanoi is actually quite pleasant, and of course so is Halong Bay, which is a very popular trip nearby. You can also go up into the nearby mountains to visit Sapa or other villages near the China border. It is all very cheap and the crowds are thin in April so you will have much of it to yourself. But seriously, avoid Saigon and that area unless you are a fan of heatstroke.

Spring is a good time for the northern and southern parts of Africa, which are where most of the popular destinations are anyway. You will really never have to worry about rain in Cairo so it is just a matter of the heat, which is still in check in April but starting in mid May it can become unbearable, so April is the perfect time to visit. As long as the political situation allows, Cairo is usually safe and always very cheap. April is still technically part of the high season for hotels, but it is at the end of it so it is easier to find a good deal, especially at one of the fancier places.

Sydney is at its exuberant best at this time of the year. Laid-back, vibrant and gorgeous, Sydney is the cosmopolitan capital of New South Wales. The city has food to rival any in the world and is at the forefront of cutting-edge design, with chic hotels and excellent restaurants.

In recent years, Mallorca, Spain has taken on a new, glamorous style. Five-star hotels are replacing budget accommodation and the beautiful island of white-sand beaches and soaring mountains is becoming one of the Mediterranean’s chicest holiday destinations.

April is the first of the four good weather months each year in Pokhara, Nepal, so things actually can get a bit crowded here, especially towards the middle of the month when all the trekkers have based themselves in town for their various journeys nearby. Still, even during high season Pokhara is cheap compared to nearly anywhere else. Finding a good deal on a hotel should be relatively easy. Still, as this is one of the busiest months it is wise to book as far in advance as possible.

The Philippines actually has a lot to make it an attractive tourist destination. It is a beautiful country, with lovely seas and beaches, picturesque mountains, unusual (and still alive!) wildlife, and a wonderfully historic past, which has given it a great cultural tradition. The Philippines is beautiful and for the beach-crazy, it has excellent seaside resorts. The natives are friendly with a population of about 92 million people and visiting the country is fairly cheap.

April is the first somewhat non-rainy month of the year in Bali, but it is almost on the equator and that means storms come and go quickly so even when they hit they are rarely a problem. This is also the time of year between the dual high seasons, so hotel prices are at or near their lowest of the year. Almost the whole island is cheap. It is a good idea to stay in several different parts of Bali on the same trip if you can, but watch out for the traffic, which has gotten horrible in recent years.

Tokyo, Japan, will be in the middle of the cherry blossom season – so join hanami (picnics under the cherry blossom trees) parties in the parks when there. Beyond its bright lights, this is a city of intimate backstreets, where people queue for hours to get into a trendy café and dining reservations are made by fax.

The cool, calm waters of the Turkish Mediterranean are ideal for a relaxing sailing holiday with nothing on the agenda but swimming, sunbathing, eating and hopping ashore for a spot of sight-seeing. Although much of the coast has been invaded by package tourists, there are still a number of unspoilt areas where you will find ruins from ancient civilizations and a more peaceful way of life. Istanbul with its glittering mosques, velvet night-spots, smart hotels and beautiful vistas, is ideal for a romantic city break.