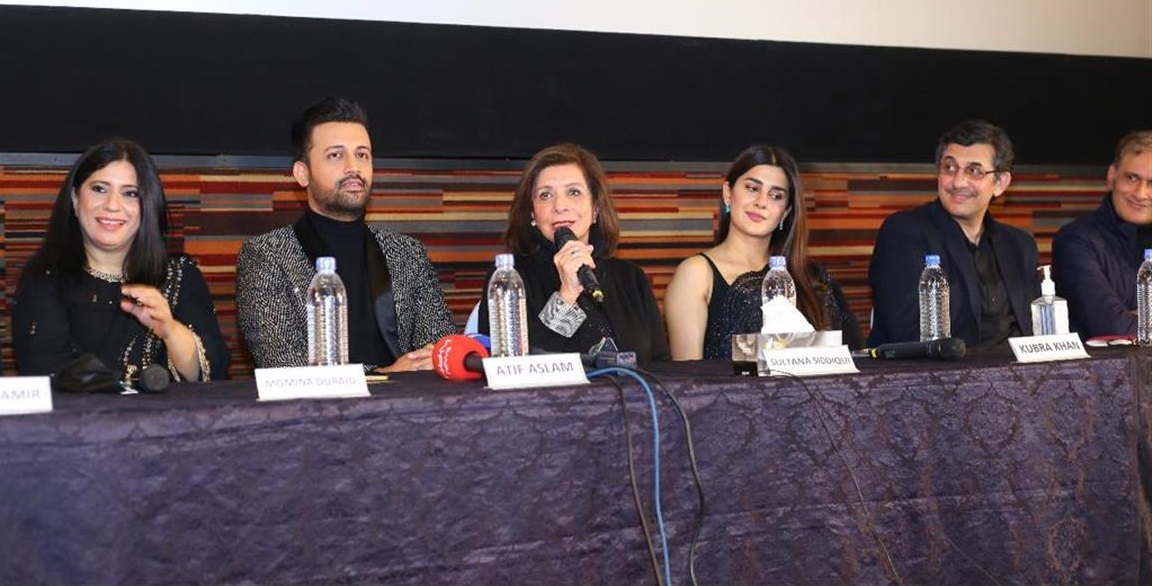 Drama serial Sang-e-Mah has perhaps gained the most popularity and hype of all 2022 dramas before even airing. Scheduled to air on HUM TV on January 9, a private special screening of the director’s cut was held for the cast and crew along with media and entertainment fraternity.

HUM TV’s latest drama Sang-e-Mah, which is under the MD Productions banner and direction of Saife Hasan with a stellar cast, seems extremely promising. Sang-e-Mah’s star cast has a mix of old and new faces, such as veteran actors Sania Saeed and Nauman Ijaz,alongside the talented Hania Amir,Kubra Khan, and Omair Rana; whereas the globally beloved singer Atif Aslam and Zaviyar Nauman will both be making their television acting debuts in Sang-e-Mah.

The plot of Sang-e-Mah revolves around a Pukhtoon family belonging to the tribal areas of Khyber Pakhtunkhwa. The story is an exciting blend of drama, romance, deceit, ego, and sacrifice.Fans are super excited to see how the characters of Marjaan Khanplayed by Nauman Ijaz and Zarghunaplayed by SaniaSaeed develop, and how their favorite singer Atif Aslam takes on the role of Hikmat who will be romantically paired with Gulmeena played by HaniaAmir.

The special screening of Sang-e-Mah’s director’s cut was an elaborate affair, with the director and cast in full attendance, along with CEO HUM TV Duraid Qureshi, CEO MD Productions MominaDuraid, President HUM Network Sultana Siddiqui, and celebrities namely Ali Rehman, Aijaz Aslam, Nausheen Shah, Hira and Mani, Mashal Khan, and Osama Tahir who enjoyed the screening, and were super excited for the first episode to air on HUM TV on January 9, 2022.

An interactive press conference with the audiencealso followed the special screening of Sang-e-Mah’sdirector’s cut, on the same evening, where the cast and crew talked about their respective roles in the drama.

Speaking on the occasion,“It’s an unconventional story set in the North of Pakistan about ‘Ghag’, a custom that has ruined the lives of several women. Sang-e-Mah attempts to shed light on the repercussions of ‘Ghag’ and discourages the use of this custom”, commented MominaDuraid, CEO MD Productions & Creative head HUM Network.

“HUM Network has always been a trendsetter. When people wanted to follow Indian soaps we set the benchmark for Pakistani dramas and the industry followed. Be it building new concepts with writers for drama or developing the fashion industry or taking Pakistani events to the world, HUM Network has and will continue to be a trendsetter and create new benchmarks for the industry,”said Duraid Qureshi, CEO HUM TV.