Women on Wheels – Let the wheels become your wings 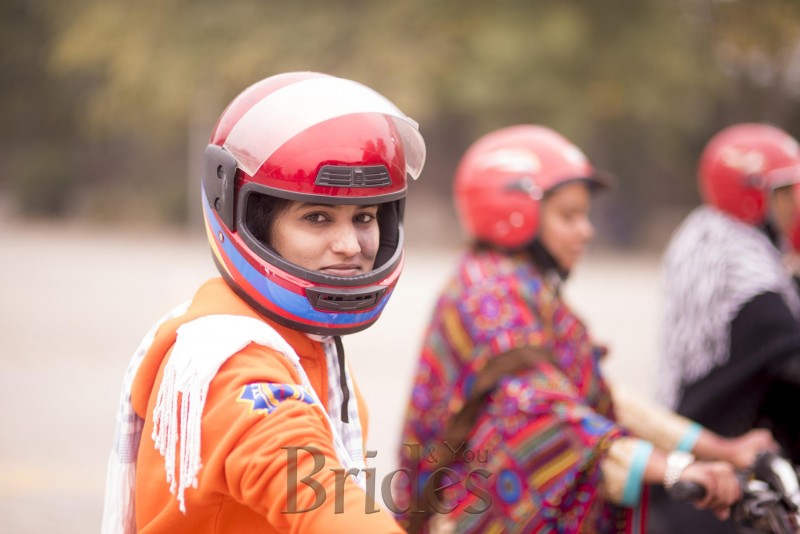 Syeda Zebunnisa and her husband travel from Nishat colony, Lahore towards Gulberg daily, to drop their kids to school and go to work. She is a professional beautician and her husband works as a guard. They support and help each other out with daily chores and children activities but conflicting work schedules and transport resources often become an obstacle. She is dependent on a male figure in the family to pick and drop her from work.

Like Zebunisa, thousands of women in Pakistan face this hurdle. Their mobility is considerably curtailed; they have largely been secluded from the public sphere through street harassment, violence and regressive mind-sets.

Women do drive and use public transportation but even today, many feel hesitation when traveling alone. “Males hoot and call names, they try and confuse us but we largely ignore them.  Still it does not mean that we do not feel it,” said Zebunnisa.

However, 2016 may mark a change in societal trends as the Government of Punjab took a bold initiative to empower women through mobility. They introduced the ‘Women on Wheels’ project aimed at providing pink scooters at subsidized rates to professional workingwomen and students.

“It is simply a message from Punjab Government that we treat and look at women the same way in which we look at men. There should not be any discrimination. The Constitution of Pakistan empowers everyone regardless of their gender. The government is not doing women any favour but assuring them of their rights,” said Salman Sufi, senior member of Chief Minister’s Special Monitoring Unit (SMU) Law and Order.

The WOW campaign will not only raise awareness regarding gender violence and equality but aims to reclaim the public space. Jointly, SMU Law and Order with City Traffic Police are providing free motorbike training to enable women in acquiring riding skills within a short period of time.

150 female motorcyclists have been trained and enrollment numbers are increasing each day. The Special Monitoring Unit Law and Order is keen on establishing a full-scale operation and a rally launch this month was planned to encourage more women to participate.

For working women and students, a scooty is an affordable and efficient means of transport that could facilitate them to become independent. “With a scooty, I can travel by myself, take my children to school without waiting for my husband or brother all the time. It will ease a lot of our time and scheduling issues along with helping us monetarily as I will not have to pay forrikshaws any more,” stated Zebunnisa who is acquiring motorbike-riding skills at City Traffic Police Driving School in Thokar Niaz Baig.

Any woman of driving age can enroll and along with driving training, they are learning about the engine in case an unfortunate incident occurs where the bike stops working. Watching a woman riding a motorbike is a rare sight in Pakistan and the public might take time to accept this change.

“If men don’t make it an ego issue and let women be empowered, it would help the society a lot,” said Iffat Arif, a university student aspiring to become a culinary chef.
Women who have enrolled in the project and receiving the training have full support from their families. Their confidence and motivation to become independent and mobile is unwavering. “If women can fly planes, we can drive motorcycles as well,” said Asma Noureen, another university student who feels the environment is hostile but not something the public cannot accept.

In order to ensure their safety, the SMU Law and Order with the help of Punjab Information Technology Board have developed an App that could trace and monitor their trails. “If any female motorcyclist is getting followed or harassed, they could simply press a button in the app and instantly the local traffic warden will be notified. He can reach the spot from where the message came from,” stated Salman Sufi.

Both the Government of Punjab and women willing to take this courageous step towards empowerment know there will be hitches “but first flight is always the hardest.”
Once more and more women are seen on the roads, harassment is bound to go down. Acceptability will come with time but certain mindsets will remain rigid. “Women will look weird driving motorbikes in their shalwar qameez. They will make a fool of themselves and give others a reason to laugh at them. They won’t look good at all and it is not safe for them,” said Haji Shaukat, a bystander questioned on the road.

However, Salman feels confident in the project’s reach and goal. More so, he feels if certain people don’t like the idea of women driving motorbikes, it won’t translate into shutting down the project. “We have received a tremendously positive response and we are expanding the programme to Multan, Sargodha and Faisalabad.”

Approximately, 20,000 female motorcyclists are anticipated to be seen on the roads of Lahore by end of this year. Scooters are getting imported from abroad and details on the pricing are under works. Along with a 50 percent subsidized rate, soft loans without markups to facilitate more women into buying them will be provided. Introducing and implementing reforms are the government’s task but a collaborative effort is required by the society at large to provide a non-hostile, conducive environment for our women. “We are doing everything to empower ourselves but our message to the public is simple; encourage rather than discourage,” said Zebunissa.

Check out this video for more information :