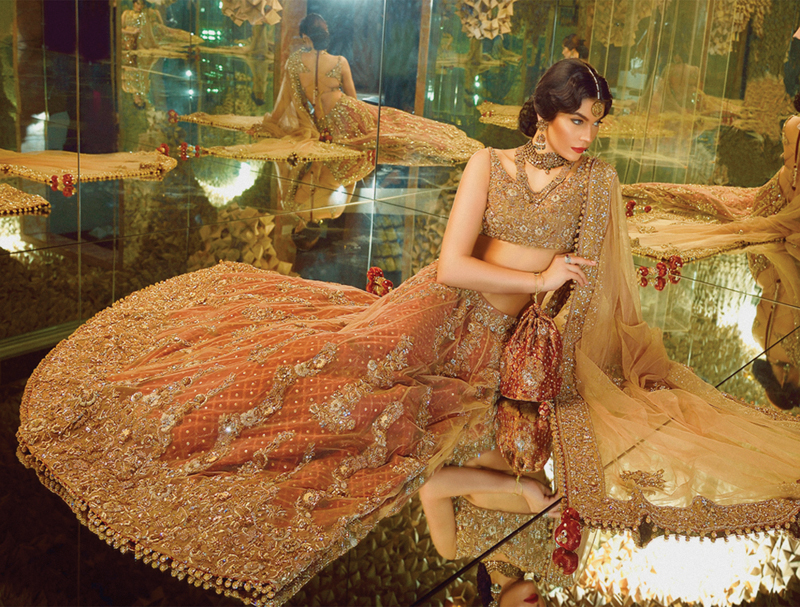 Immersing in everything from clinical psychology to styling and eventually fashion, Maheen Taseer is a woman of many talents. Her name was always known in the fashion circles but her recent unveiling as a designer really caught attention. Some were quick to judge that her last name ‘Taseer’ caught the attention of clientele which many beginners crave for. Others simply hailed her effort. “People are quick to judge and with a known family name, you are more open to scrutiny. But judge me on my work, critique me because that helps and I can learn from it.”

Having a penchant for fashion all her life, Maheen stepped into the highly saturated fashion arena four months ago. She chose one of the most awaited fashion events in Pakistan, PFDC L’Oreal Paris Bridal Week, to showcase her collection titled ‘Valliant’. It is a French word that stands for determination and bravery and she dedicated it to her husband, Shahbaz, who was abducted four years ago and has still not been found. “Whenever he comes back, I want him to know that he was a part of my work, because he is so important to me.”

Her design philosophy for bridals is simple- to reinvent traditional looks in a contemporary way. Keeping this ‘old school charm’ in mind, the anthology featured opulent hues of maroon, red and gold. Her work exhibited an Eastern play of antique gold work with gotta and dabka, inclusive of Swarovski crystals, jewels and pearls. “I wanted that traditional element in my collection and the essence of an old school bride.” For a lot of critics, bridals showcasing at a fashion week should be experimental, having that edgy statement wear look. Those are the ones that fall into the fashion week ‘hit’ category but Maheen stuck to her mantra. “If I was going to be a bride soon, I would want to be able to envision myself in a dress that is beautiful, timeless, classic and one that I can pass on as an heirloom. I will not be experimental on my special day.”

Set on traditional fabrics like silks, brocade, velvets, net and banarsi, the collection was truly a remarkable representation of an old school era with a hint of modernity. The cuts centered on voluminous silhouettes creating floor-scraping lehngas and gharararas with short cholis and long shirts. She plans to steer clear from pastels and heavy silver sequined bridals that everyone seems to love. “Pastels have really been done to death.”

For her own wedding, she chose Sabya Sachi, an acclaimed Indian designer who customized a bridal into her dream outfit. It incorporated deep tones of red, blue and gold, encapsulating tradition and heritage that Maheen seems to delve into.

Designer bridals have become expensive. Well known names ask for six to eight lakhs as starting price. But Maheen is happy to adjust within people’s budget. Should someone want to customize and work within a range, she’s willing to tweak the outfit accordingly. “We give you your money’s worth because to me at the end of the day it is more about people loving the product. Rather than the money, I want them to look their best.”
Given the tragedy that struck, Maheen epitomizes courage striving to rise against all odds. She narrates her arduous journey before coming out in the public. She is happy that she is doing what she loves most. “For the first three years, I did not even leave my house. Now I make a conscious effort to follow my passion- making people look and feel their best, empower them in whichever way you can.”

Today, the market is swarming with designers and the circle Maheen belongs to consist mostly of them. With her sisters in law, Shehrbano Taseer and Rema Taseer also designing luxury formals for their label ‘Aurora’, Maheen agrees that there is a lot of competition in the market. “Eventually only if your work is unique, if you have talent, eye and passion for it, you can sustain.” It is also surprising to note that many high-end brands hire people who do the designing for them, which makes no sense to Maheen.
She is looking into a lot of cuts with shorter coats and flared pants for the upcoming bridal season. She plans to experiment with Eastern and Western cuts for her luxury formals but hopes that brides start acknowledging the traditional fashion with diverse colors as part of our culture. Eventually, it is her design philosophy and aesthetic sense that will make or break the brand name, MGT, and she is intent on doing just that.