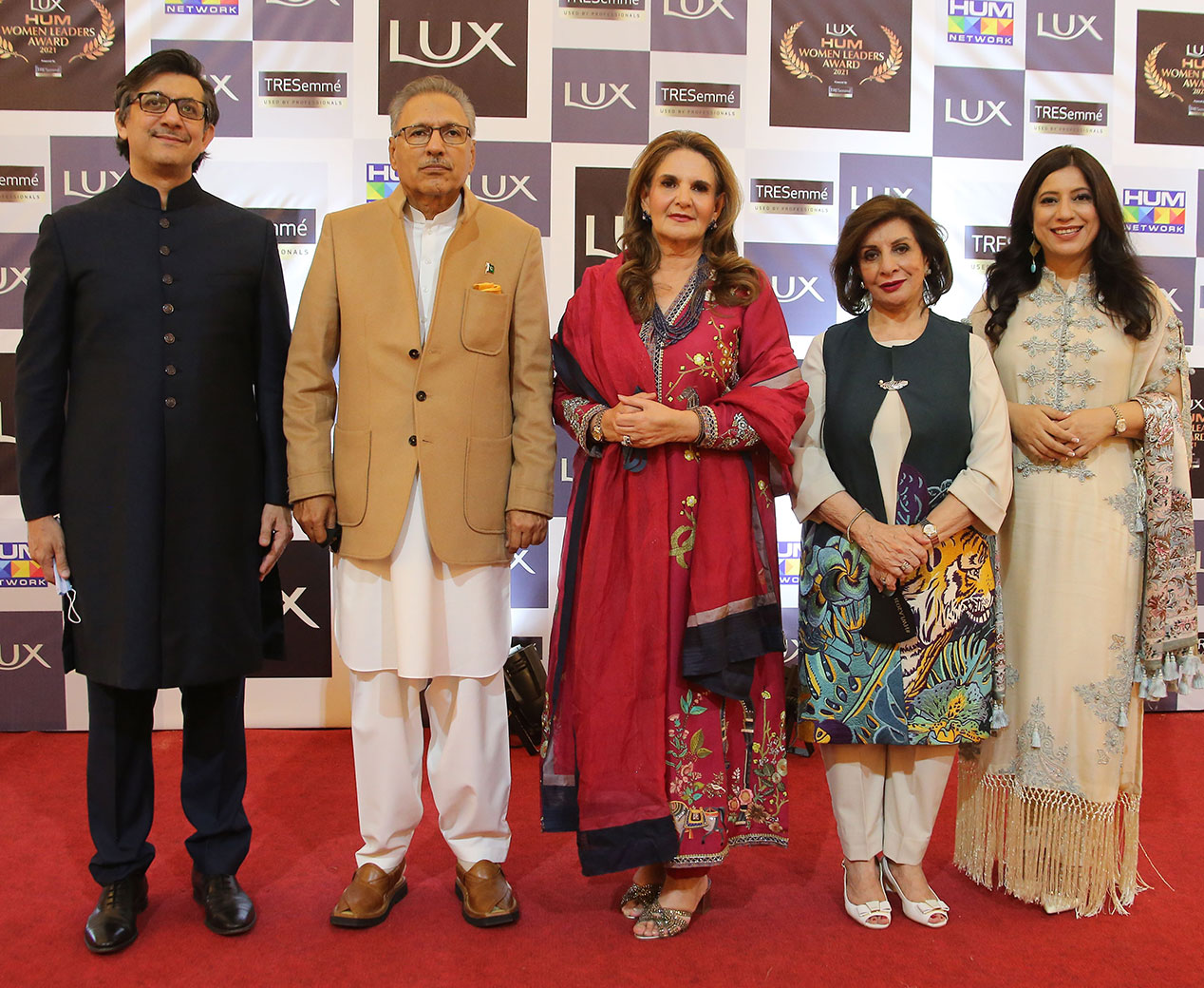 The second edition of HUM Women Leaders Award successfully concluded here earlier today at the Aiwan-e-Sadar celebrating eleven national and international women icons and as per HUM tradition, one dynamic man for their contributions and achievements in the fields of diplomacy, social work, education, healthcare, human rights, journalism and women’s rights. The awards ceremony was graced by chief guest, president of Pakistan, HE Dr Arif Alvi, dignitaries and crème de la crème of the entertainment industry of Pakistan.

After the national anthem the event kicked-off with a poetic recitation by Yousuf Bashir. Hareem Farooq and Sanam Saeed, the hosts for the evening invited Sultana Siddiqui, president HUM Network Limited to address the audience. Siddiqui stated, “It has been my lifelong struggle to see that women are given their due importance in all fields. There should be no glass ceilings, no chains of traditions and customs to stop their flight. In today’s economy it is imperative that women be given equal chance to prosper. We cannot have a progressive economy with women shut in doors.”

The awards ceremony then began with the first award being presented to Ayesha Chundrigar, humanistic psychotherapist and journalist who single-handedly started the first and largest animal rescue organization in Pakistan and has rescued and rehabilitated more than 7,000 animals so far. In almost eight years, the Ayesha Chundrigar Foundation has become the leading Animal Rescue Service & Sanctuary in Pakistan, paving the way for animal rights to become a norm in society. The award was presented by Nabila Masood and Shafqat Mehmud.

The second award of the evening was presented to Tabassum Adnan the first woman in Pakhtun history to have founded an all women jirga, Khwendo Jirga, which means Sisters’ Council, a milestone for the women of Swat. She was the first to be invited at the District Resolution Council paving the path for local women to participate in the decision-making process. In 2015, The US State Department conferred on her the International Women of Courage Award while in 2016 Tabassum Adnan was presented the Nelson Mandela – Graça Machel Innovation Award in the Individual Activist Category. The award was presented by Vaneeza Ahmed and Amir Ibrahim, CEO Jazz.

The next award was presented to Ayesha Jalal, the insightful historian and educationist whose exemplary research articles and books provide unique insights into the culture and history of the subcontinent. She received the Jean Mayer Global Citizenship Award in 2010 and was also the recipient of the Great Immigrants Award 2012 from the Carnegie Corporation of New York. The Government of Pakistan awarded Ayesha Jalal the Sitara-e-Imtiaz in 2009. As she could not be physically present at the event, an acceptance message was shown on video.

The next recipient was Pakistan’s ace cosmetologist and philanthropist Masarrat Misbah, who, defying all odds revolutionized the beauty salon industry in the country. In 2003 she conceptualized Depilex Smileagain Foundation to help burn victims. Her organization helped many victims receive the best available medical treatment and psycho-social support. Additionally, these victims are rehabilitated through vocational trainings, small business set ups and job placements. Recipient of Pride of Performance in 2010 Misbah is also the first Pakistani woman to be recognized for her courage and commitment by the government of Italy. She received her award from Bushra Ansari and Dr Ishrat Hussain who is the advisor to the prime minister.

The first segment of the awards was followed by a special performance by Qurat ul Ain Baloch and Umair Jaswal who enthralled the audiences with their mesmerizing voices.

The next awardee, Princess Sarvath Al Hassan, the first leader to establish a nonprofit education programme that offered equal opportunities to every student in Jordan, presided over the Young Muslim Women’s Association and pioneered several initiatives such as establishing the Bunayat Center for Special Education in 1974, founding the Princess Sarvath Community College in 1980; launching a Sheltered Workshop in 1987 and setting up the National Center for Learning Difficulties in 1995. Princess Sarvath Al-Hassan also served as the Honorary Vice President of the Jordanian Red Crescent from 1994- 2004. An audio acceptance message by her was played on the occasion.

Up next was award recipient deputy superintendent of Police, Shahzadi Gulfam the first Pakistani woman police officer to receive the International Female Police Peacekeeper Award by the United Nations in 2011. In her career stretching for more than three decades, she has delivered brilliantly, both nationally and internationally. She was the first Pakistani female officer to be deployed in the UN Mission in Bosnia-Herzegovina and has also served in Kosovo and Timor-Leste. The award was presented by Noman Ejaz and Fahmida Mirza.

Maria Fernanda Espinosa Garces successful diplomat, profound academic and seasoned politician who has set an example of woman empowerment with her illustrious career was the next award recipient. She has headed various ministries such as Foreign Affairs, Defense and Culture and Heritage in Ecuador. Espinosa was the first female ambassador of Ecuador to the United Nations in New York and Geneva. The fourth woman in history to serve as the president of the United National General Assembly she has been regional director for South America for the International Union for Conservation of Nature. A video acceptance message was shown.

The only man awardee of the night, was Malik Rafique Awan who has set a precedent that is both worthy of appreciation and emulation as all his five daughters have passed the Civil Superior Service exams and are serving their country with the zeal they have inherited from their father. On the birth of his fifth daughter, Awan and his wife Khursheed Begum were ridiculed and they decided to put an end to gender discrimination from society. After a struggle of more than two decades, Mr and Mrs Awan set an example by raising strong and empowered girls. His eldest daughter, Laila Malik Sher is Deputy Commissioner Income Tax Department in Karachi; Shirin Malik Sher is serving as Director at the National Highway Authority Islamabad, Sassi Malik Sher is Deputy Executive, CEO Chaklala Cantt. Rawalpindi and Marvi Malik Sher has been appointed as Additional Assistant Commissioner Abbottabad. The youngest daughter Zoha Malik Sher has joined the Officers Management Group. Today the Awans’ daughters are a symbol of national pride. The award was presented by Bushra Ansari and Rafique Awan’s three daughters.

A power-packed performance by Strings followed after which the final round of awards began. The next award recipient was Hina Jilani. Her career has been instrumental in setting new standards for human rights in the country. She is currently serving as the president of World Organization Against Torture. Jilani has also been associated with The United Nations, The International Commission of Jurists and The South Asians for Human Rights. She was awarded the American Bar Association Litigation Award in 1992, And Peace Prize in 2001 along with other notable awards throughout her journey. The award was presented by Duraid Qureshi.

Although the next award recipient was not there to receive her award in person, the international icon for education, Malala Yousafzai whose journey has pushed the global community to do more for child education, had sent Dr Maliha Khan, Malala Fund Manager from the UK to receive the award on her behalf. The youngest Nobel Prize Laureate for her efforts to see that every girl completes 12 years of education, and who established the Malala Fund in 2013 along with her role model father, was presented the award by president HUM Network Sultana Siddiqui.

Abida Parveen the uncrowned empress of Sufi Music who is among the 500 Most Influential Muslim Artists in the world, was the next award recipient. Abida Parveen is the recipient of eight Pride of Performance Awards, the Sitar-e-Imtiaz and Pakistan’s highest civilian honour, the Hilal-e-Imtiaz. The award was presented by the first lady, Ms Samina Alvi. The last award of the evening went out to Lt. General Nigar Johar, the first ever female three-star general in the history of Pakistan and the first female Surgeon General of Pakistan Army. Hailing from Panjpeer Village, in Swabi District, Nigar Johar was also the first female Commandant of any armed forces unit and the first female to have commanded the largest hospital of Pakistan Army. An expert markswoman, she is the recipient of Fatima Jinnah Gold medal, Tamgha e Imtiaz and Hilal e Imtiaz along with an honorary membership at the Royal College of Physicians (UK). The award was presented by President Islamic Republic of Pakistan, Dr Arif Alvi.