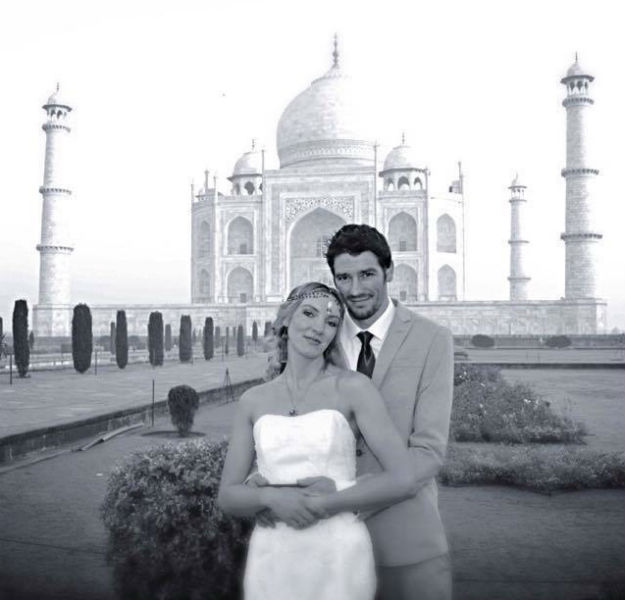 And it cost them less than an average wedding!

There is perhaps nothing spectacularly newsworthy about getting married, yes. (Unless of course you’re the Mittals or the Ambanis or the Sharifs.) But we cannot help but doff our hats to this couple that totally nailed this wedding business. Meet Amelia and Brett who decided against having one big wedding ceremony and instead decided to have e-i-g-h-t smaller ones… around the world!

It all started when their South African wedding plans came crashing down due to a date conflict with Brett’s brother’s wedding. They faced the challenge of picking a date, destination, and honeymoon that would still enable them to attend Brett’s brother’s ceremony. Amelia, an event-planner, then came up with the idea of going on a month-long honeymoon and returning to South Africa by the time of the ceremony. This further led to the idea of getting married all around the world in eight different ceremonies with select guests instead of spending on one big fat wedding.

This way. they did not have to pay for the food, party and travel of others and the money was spent on themselves. Also, they used their wedding and honeymoon funds merged into one.

They got to travel the world and also click amazing wedding pictures! They decided to take their five-year old son along who turned out to be the only one to attend all of the wedding ceremonies.

They picked their countries wisely based on their travel aspirations. Their plans took them from Paris to Moscow and the Trans-Siberian railway which included Irkutsk, Mongolia, and Beijing from where they accessed the Great Wall of China.

This was followed by Nepal and their longstanding dream of visiting India and the Taj Mahal. They then flew to Mumbai where they spent a couple of days and then headed to Mauritius which was their last stop before reaching Johannesburg just in time for Brett’s brother’s wedding ceremony.

All we can say is WOW! Well done Amelia and Brett! Who wouldn’t dream of such a wedding-cum-honeymoon?