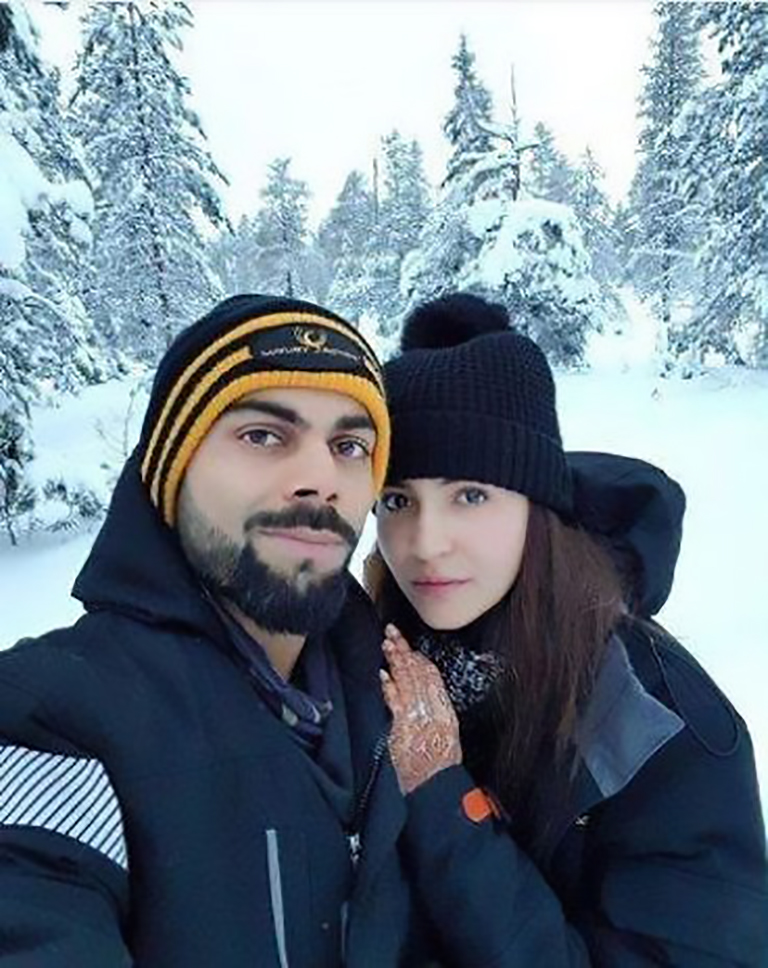 We wondered where Anushka Sharma and Virat Kohli were when the actress’ family were photographed returning to Mumbai yesterday, and now we know. The newlyweds are on their honeymoon, folks, where else? South Africa can wait. Not sure exactly where they are but from the picture Anushka Sharma posted on Instagram, it seems to be a winter wonderland somewhere in Europe (Italy, where they married? Switzerland?). The photo is a selfie of the newlyweds “In heaven, literally,” the 29-year-old actress captioned the picture. Within minutes of being posted, the picture went viral – it had over two lakh likes in the first 20 minutes itself. Compliments such as ‘cute’ and ‘lovely couple’ have flooded the comments thread.

Anushka Sharma and Virat Kohli married in Italy last Monday in a wedding they managed to keep secret (almost) for a year. Rumors they were getting married snowballed last week, and Anushka was later spotted at Mumbai airport flying out to an undisclosed location with her parents and brother. After a speculation-packed weekend, Anushka and Virat married at a Tuscan resort on Monday, making the wedding announcement on their Twitter accounts some hours later.

Anushka and Virat will host two receptions later this month – one in New Delhi, which is Virat’s hometown, on December 21; the second in Mumbai on December 26. They will spend the New Year in South Africa after which Anushka returns to resume work of her film with Shah Rukh Khan and Katrina Kaif and Virat stays on to play a series.

Anushka Sharma and Virat Kohli will live in Mumbai – he will move cities from Delhi. They will reportedly live in the sea-facing apartment in Worli that Virat bought last year.