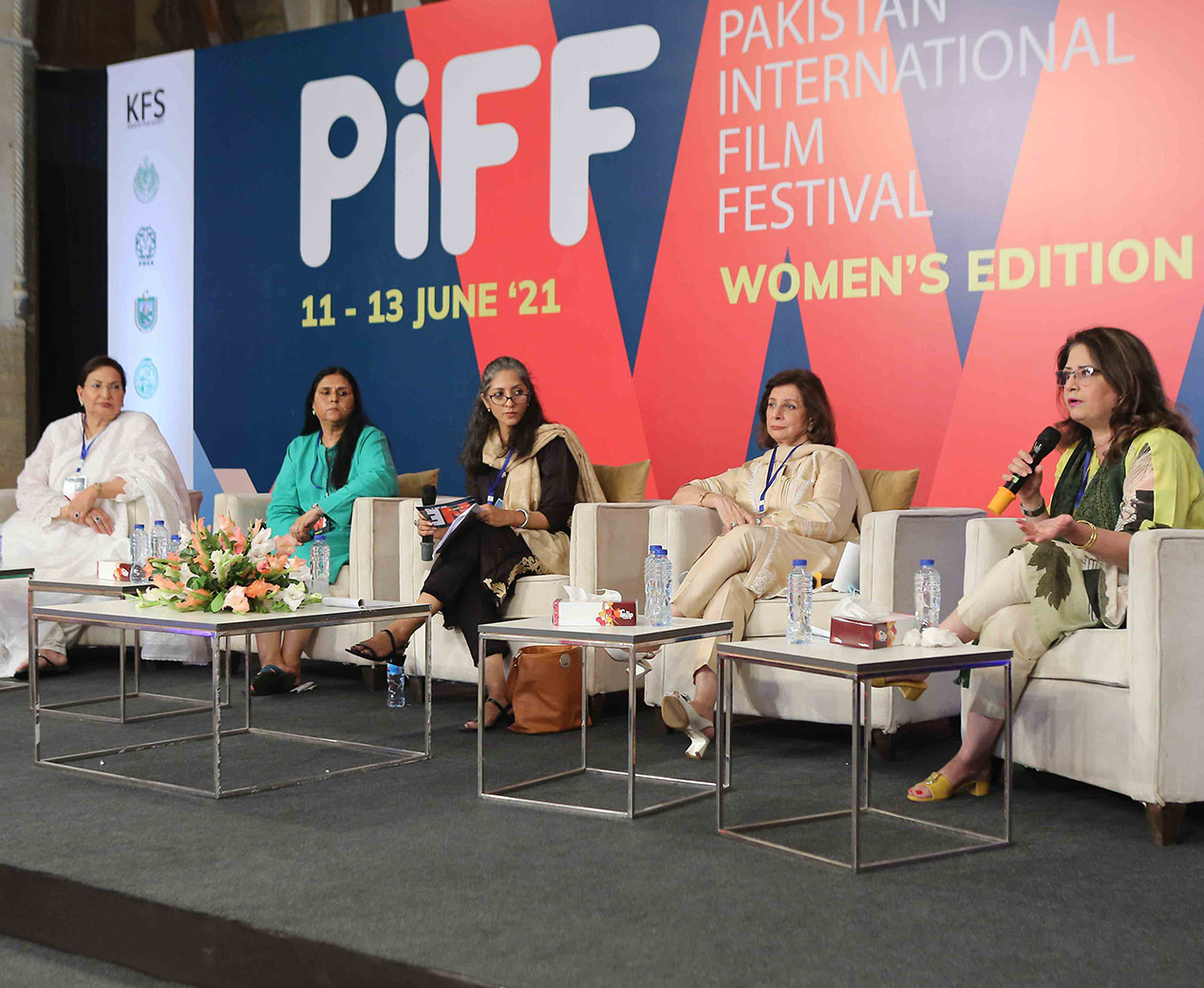 The three-day Pakistan International Film Festival, Women’s Edition 2021, organized by the Karachi Film Society, concluded here in the metropolitan city with a workshop on Women Entrepreneurship in a Creative Economy, followed by a panel discussion on Gender Stereotypes in Media and What are Women Doing About It? The panel discussion was attended by the Provincial Minister of Sindh for Culture, Tourism, and Antiquities, Syed Sardar Ali Shah, Senator Sehar Kamran, media fraternity, founding members of the Karachi Film Society and other guests including Bushra Ansari, Zeba Bakhtiar, Urwa Hocane and Shafaat Ali.

The workshop on Women Entrepreneurship in a Creative Economy was conducted by Ashifa Paracha, CEO Brand Advertising, WCCI member and founder of the Pakistan Digital Awards & Corporate Lounge and Sadaf Mahmood, CEO Xiphios Innovations and COO Nutshell Communications. Organized under the umbrella of Women Chamber of Commerce and Industry, the workshop detailed how women can learn and further promote businesses and startups in the digital world.

The seminar/webinar on Gender Stereotypes in Media and What are Women Doing About It? was moderated by Tazeen Hussain, an associate professor and head of the Department of Communication Design at Indus Valley School of Art and Architecture. The panelists present were Sultana Siddiqui, President KFS & HUM Network Ltd and recipient of Sitara-I-Imtiaz as well as the President’s Pride of Performance for her outstanding contributions in the field of television/entertainment; Atiqa Odho, Chairperson of FocusPK, an entrepreneur, social activist and artist; Sangeeta, director of blockbuster Pakistani films such as Society Girl, Mian Biwi Razi, Mutthi Bhar Chawal and Tasneem Ahmar, head of UKS Research Centre- a gender-based media advocacy and monitoring organization and executive producer for Meri Awaz Sunno.

The panel discussed and addressed the discrimination persisting against women in the media industry. Atiqa Odho said that although these issues do exist in our industry one has to be strong, persistent and vocal about all kinds of discrimination. She also said it was her co-actors (men) who helped her in the field in the beginning of her career. Panelist Sultana Siddiqui added that women in our field are judged differently than men. It is the need of the time to change the lens through which women are viewed and judged. The younger generation, especially women, should be encouraged to join the field and it can only be done through collective efforts. Men and women should learn to co-exist if they want to succeed, she added. The panel also discussed the need to change the mindset of the masses through realistic portrayals of strong and successful women characters, changes required in PEMRA laws and the need to establish strong, independent association to protect the rights of women in media. The panel also discussed the need to establish strong and independent digital entertainment portals, co-productions and government facilitation.

Following the panel discussion, Provincial Minister, Syed Sardar Ali Shah, delivered a keynote speech. The Provincial Minister began his speech with a tribute to Shaheed Benazir Bhutto who inspired millions of women across the globe. He appreciated the efforts of KFS board members in organizing such meaningful dialogues and assured his government’s support for the film industry. “We can start an initiative to support the film industry within a year if all the stakeholders can come on one page,” he added.