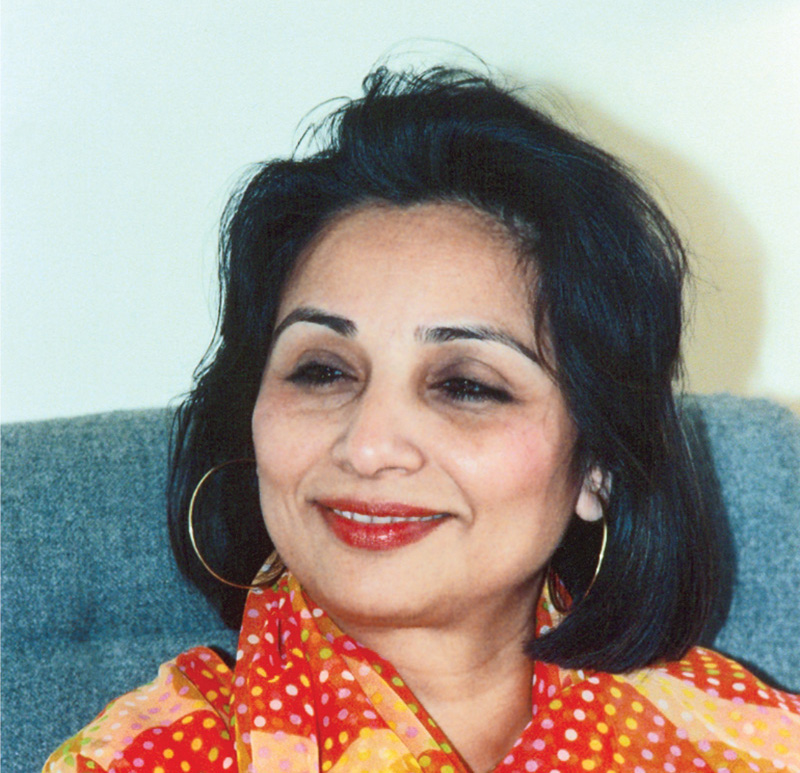 Most of us know Mahtab Rashidi from her TV appearances of the seventies and eighties when a young beautiful woman captured the heart of her viewers by her mesmerizing smile and her open, candid mannerism. She hosted many talk shows including ‘Farozan’ and there were rumours that this woman is not just a pretty face but also a highly educated university professor – a combination that easily won her a special place in the hearts of her viewers.

Many noticed her by her absence and by her principled stand at refusing to obey the unfair dictates of a dictator. She disappeared from the screen, like many talented people who were unwilling to sacrifice their freedom for fame, when Zia ul Haq came into power and imposed his brand of Islam on television programmes. The disobedience caused a ban on her appearance on television which lasted for 8 years.

She reappeared after Zia-ul Haq’s death during the election transmission and is now planning a few programmes on Hum Television and Pakistan Televison Network. One of her planned programmes is Meri Kahani Meri Zubani to be aired by Hum TV and to document the lives of the living legends.

I being one of her admirers on both counts was lucky enough to meet her again recently. She may have gained a little weight but her smile retains the charm of yesteryears. We spent two three days together in Bangkok and that is where I met the real Mahtab Rashidi, who is a lot more than a pretty face and a brainy professor. he is above all a beautiful, fun loving friend who makes everything look so simple and good that you tend to forget all the painful realities of life.

Mahtab was born in a family of four sisters and one brother. Her father was a school teacher and her mother an illiterate woman. She belongs to the village of the late Prime Minsiter Benazir Bhutto. Her father was a very liberal man despite his rural background and environment. He was a supporter of girl education and made sure all his four daughters would complete their education even if it meant for him to transfer from the village of his forefathers and move to a city where higher education was available to girls. In Nodero, where he was a school teacher there were no schools for girls so he had put his daughters in co education and when he realized that they could not continue their education in Nodero he moved to Hyderabad. So although the village Mahtab grew in was not very educated, liberal or broadminded but the house was just the opposite because of her father.

Mahtab being the youngest of her four sisters remembers her childhood as a very happy time except that when she finished her schooling from Meeran school her father made her study science and got her enrolled for FSc. He wanted her to become a doctor but Mahtab had no stomach for science subjects, maths and chemistry were totally beyond her.  She did poorly in her exams and her father had to allow her to study art subjects. That is where she excelled and got through all her exams with distinction.

Her growing up was not tough because of her father. She had the freedom to travel and to work on televison, unlike most girls, at a young age. She remembers that they were allowed to visit friends but prior permission was very important. There were rules in the family the logic behind which was only known to the parents. For example they would visit friends but never stay at their place for the night. A rule Mahtab imposed in her household as well. She remembers that her mother was not very happy about her TV assignments but her father supported her and let her follow her dreams. She gained tremendous confidence from her work on TV.

Mahtab believes that parents should have confidence in their children and they should allow them to explore their potential. She said that we are going backwards in many ways and one is the way women are treated in our society. Girls used to have better life, a more liberal lifestyle in yesteryears compared with current times. These undue restrictions kill confidence, productivity and creativity in humans and we need to do away with them especially when it comes to women and young girls.

Mahtab’s dream in life was to become a school teacher. She has a gift for dealing with children who love her in return. She even did Bachelors in education and joined St. Mary College in Hyderabad to follow her dreams but was pulled out because she won lecturership in Government  College.

She still remembers her short tenure as a school teacher. Children would call her the teacher with flowers as the moment she would enter college her students would offer her gifts of flowers and by the time she would reach the staff room she was loaded with bouquets that were offerings from her admiring pupils.

She was working in Sindh University, International relations department when she won full bright scholarship and went to US for higher studies. On her return she rejoined her post. That is when she met her husband.

Mr Rashidi had won quite a reputation for being a good looking engineer who had joined university in her absence. Her first meeting with him was a memorable event. She had gone to see her chairman in connection with a complaint and he was also there, as the campus was very big so they used to move around in car provided by the university. When Mahtab came out of the chairman’s office she found out that the car that was supposed to transport her back had gone to pick someone else. The university photographer who was present at the occasion introduced Akbar Rashidi to her and also suggested that she should let Akbar Rashidi drop her off to her department as he owned his own car. Mahtab kept waiting for Rashidi Sahib to make the offer himself but when he didn’t she decided to wait for her ride and not impose herself on him exploiting the photographer’s suggestion and politely declined the offer. However, she still remembers that she was offended by the snobbish attitude.

A few days later Mr Akbar Rashidi had to visit her department for some building repairs and that is how they got to know each other. In 1981 Mahtab married Akbar Rashidi in a grand ceremony that was attended by the late Benazir herself.

There is a historic event related to her wedding. Belonging to the same village and being the educated woman brought her close to Benazir and her family. Begum Bhutto asked the family to change the wedding date. It was announced in the newspapers that Begum Bhutto will attend the wedding on a certain date. That got the government’s attention away from Begum Bhutto, which made it possible for her to slip to Lahore and attend the Convention which the government didn’t want her to attend. She had sent Benazir in her place to attend Mahtab’s wedding.

Reminiscing about the early days of her married life she said that her marriage was not an easy one as her husband belongs to a very conservative Syed family who were not very enthusiastic about his choice for a bride. Her father in law was unhappy with the union and only changed his mind when he came to visit his son after the birth of his first grandson Rafay. Mahtab said that he came to visit her in her office and for the first time realized that his daughter in law was a high level very well respected officer. He was proud of her and was big enough to show his change of opinion.

Mahtab has two sons Rafay and Suhaib. Rafay is married and settled in Pakistan Suhaib is still studying. In 1988 Mahtab moved to Karachi and got posted as Secretary Culture, Youth affairs and sports. She is the first woman to have this title. After that she became the Director General of Environment, then Secretary Education and later Secretary Culture. She retired from administration job as Secretary Inter-provincial coordination.

Mahtab managed time for social welfare activities despite her demanding job portfolios. She became a volunteer for Rahnuma Family Planning Association of Pakistan in 1980 and continues to serve the organization in the capacity of a vice president even today. She is also a member of the Sindh Graduate Association and President of Business and Professional Women Association.

Mahtab is the Executive Director of I Television Network that looks after HUM, Masala, Oye and Style 360 channels.

She loves to read books, likes being at home more that anywhere else but doesn’t like to cook. She enjoys socializing but only with close friends. She is a calm person by nature; she does not panic or take stress. She has a positive attitude towards life which makes her a delightful person. The strengths of her characters include words like determination, integrity, faith in herself and God, humility and she says she loves people.

She believes her biggest achievement is that ‘being a woman she is considered to be somebody who others want to follow. “When young girls come to me and say we want to be like you I feel very proud and happy.”

She protests when people compare her to Benazir on the ground that Benazir came from a highly privileged background for her to get education and to become who she became was a different kind of struggle whereas for people like Mahtab who live in the world of common people life brings many challenges. Mahtab’s success gives hope to ordinary women that they too can become extra ordinary by inculcating the qualities of determination and integrity like Mahtab.